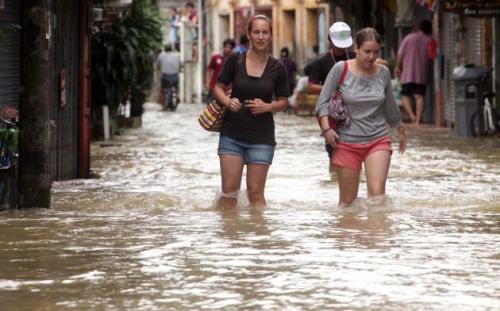 Downtown Chanthaburi was submerged in up to a meter of water and authorities warned it would rise further. Schools in flood-hit areas in the province have been ordered shut until Friday as a precaution.

Chatchai Phromlert, director-general of the Department of Disaster Prevention and Mitigation (DDPM), reported yesterday that more than 1,000 families in Chanthaburi’s Muang, Makham, Khlung, Tha Mai, Laem Sing and Kaeng Hang Maew districts were affected and that 200 residents had been evacuated.

In Trat’s Muang, Khao Saming and Laem Nhop districts up to 92 homes were hit by as much as 50cm-deep floods, while in Nakhon Ratchasima’s Muang and Bua Yai districts 465 households had been affected, he said. Water in Nakhon Ratchasima has subsided and the roads are passable, Chatchai added. DDPM officials in the region have been dispatched with tools to speedily drain the floodwater, help the affected residents and assess the damage for compensation, he added.

Out of some 20 injured people, only four were still hospitalised as of 11am; one at Kaeng Khoi Hospital and three at Saraburi Hospital. Most of them had suffered broken limbs, he added.

Pradit said the 19 victims whose bodies were burnt beyond recognition were sent to the Institute of Forensic Medicine (IFM) at Bangkok’s Police General Hospital for identification.


Rice association offers Bt20m in case of fatality
The Nation / Phuket Gazette
PHUKET: The Thai Rice Packers Association is launching a campaign to boost consumer confidence in the safety of Thai rice by offering Bt20-million compensation to the family of anyone who lost their life as a result of having consumed toxic Thai rice.

At yesterday’s conference, Somkiat Makcayathorn, chairman of the association, said members vowed that their rice is safe from any toxic content.

“The association has decided to offer Bt20 million compensation if any consumer had lost their life after consuming Thai rice or there was any toxic problem. The association has full confidence in the quality of Thai rice and vouches for its safety. There is no substance or additive that could harm consumers’ health,” stated Somkiat.

The association comprises 128 companies that own about 800 rice pack brands. They have a combined market share of up to 95 per cent of the total trading value of rice packs in the Thai market.

The association has also allocated Bt5 million for random inspection of rice quality every month. It will emphasise on checking if the fumigant substance methyl bromide was used on the rice. Thailand will stop using this substance by the end of 2014 as it harms the environment.

Somkiat added that since the discovery of the substance on Thai rice and rumours of their being unsafe, sales of Thai rice packs had been impacted. For instance, rice purchases fell from 3-4 packs per time of purchasing to 1-2 packs.

Despite the recent negative publicity, the association is confident that with its strong campaign rice-pack sales will increase by 5 per cent to Bt30 billion this year.

Meanwhile, the Commerce Ministry has set up a plan to boost exports of halal foods to US$10 billion by 2014, accounting for 10 per cent of the total food export value, up from 4.3 per cent at present.

After a meeting with the Centre of Deep-South provinces management, Deputy Commerce Minister Natthawut Saikua said the ministry is also targeting increased halal food sales in the South.

The ministry will integrate the halal food-supply chain and promote the setting up of halal food-franchise businesses to trade both in the local and overseas markets.

The ministry will also cooperate with other government agencies to allocate areas for selling halal foods such as at airports, bus terminals and train stations.

According to the ministry, about 3,000 halal food manufacturers are operating in the Kingdom.

The doctor said Nayiha Yeera, 38, died from bomb shrapnel embedded in her skull, right wrist and elbow; while Nurayahan Awae, 35, was found to have shrapnel in her skull and chest. Relatives collected the bodies yesterday.

The bomb in a 12-kilogram metal box, apparently meant for the police patrol truck that was escorting the teachers’ vehicle to school, also wounded another male teacher and two policemen. The wounded – identified as Apichard Benchulamas, 34; Pol Sergeant Taweesak Yosawat, 30; and Pol Lance Corporal Chatchapol Raksat, 32 – were taken to the Naradhiwas Rajanagarindra Hospital.

Chanae deputy inspector Pol Lieutanent Pongpan Kapankhiao, who was part of the protection unit, said the seven-strong team on the truck and two motorcycles were escorting the teachers’ vehicle.