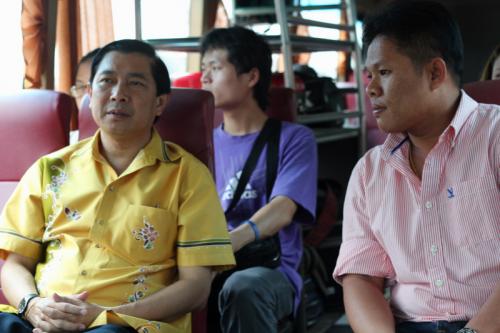 “The condition of the bus was good, and it was clean and safe. The staff were good too,” Gov Maitri said.

“One thing it needs is more publicity. I don’t think many people know it exists,” he said.

The governor did not foresee problems with taxi drivers, despite previous vehement protests against the new service.

“I don’t think local taxis will protest it, because they aren’t competing for the same customers. People who prefer limousines will still use them, as will people with a lot of luggage,” Gov Maitri said.

“Bus passengers are most likely to be backpackers and local people,” he added.

“The bus only costs 120 baht from the airport to Patong. It is a good deal for people who cannot afford a taxi. I believe taxi drivers understand there needs to be this option.

“It is a fundamental public service,” he said.

For the Gazette‘s special report “Transport evolution” click here. Subscribers can see the page 1 story in the digital version of the current hard-copy issue of the Phuket Gazette here.