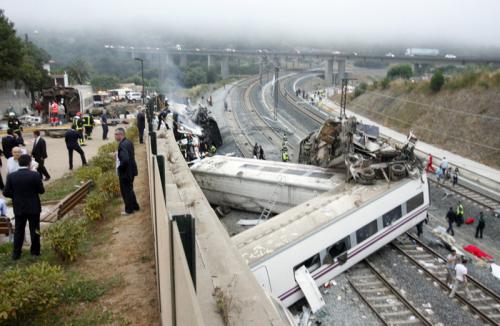 
At least 56 killed, 70 injured, after train derails in Spain
Reuters / Phuket Gazette
PHUKET: At least 56 people were killed and 70 injured when a train derailed on the outskirts of the northern Spanish city of Santiago de Compostela on Wednesday in one of Europe’s worst rail disasters.

Bodies covered in blankets lay next to the overturned carriages as smoke billowed from the wreckage. Firefighters clambered over the twisted metal trying to get survivors out of the windows, while ambulances and fire engines surrounded the scene.

The government said it was working on the hypothesis the derailment was an accident – although the scene will stir memories of 2004’s Madrid train bombing, carried out by Islamist extremists, that killed 191 people. Sabotage or attack was unlikely to be involved, an official source said.

The train operated by state rail company Renfe with 247 people on board derailed on the eve of the ancient city’s main festival in honour of Saint James when thousands of Christian pilgrims from all over the world pack the streets.

“It was going so quickly. … It seems that on a curve the train started to twist, and the wagons piled up one on top of the other,” passenger Ricardo Montesco told Cadena Ser radio station.

“A lot of people were squashed on the bottom. We tried to squeeze out of the bottom of the wagons to get out and we realised the train was burning. … I was in the second wagon and there was fire. … I saw corpses,” he added.

Prime Minister Mariano Rajoy, who was born in Santiago de Compostela, will visit the site on Thursday morning, his spokeswoman said.

“In the face of a tragedy such as just happened in Santiago de Compostela on the eve of its big day, I can only express my deepest sympathy as a Spaniard and a Galician,” Rajoy said in a statement.

Santiago de Compostela’s tourism board said all the festivities, including Wednesday’s traditional High Mass at the centuries-old cathedral, were cancelled as the city went into mourning.

Clinics in the city were overwhelmed with people flocking to give blood, while hotels organised free rooms for relatives. Madrid sent forensic scientists and hospital staff to the region on special flights.

The head of the surrounding Galicia region, Alberto Nunez Feijoo, said at least 56 people were killed and about 70 injured, more than 20 of them seriously.

“The scene is shocking, it’s Dante-esque,” he said in a radio interview.

The train was travelling from Madrid to Ferrol on the Galician coast when it derailed, Renfe said in a statement.

The disaster happened when Spain is struggling to emerge from a long-running recession marked by government-driven austerity to bring its finances into order. Firefighters called off a strike to help with the disaster, while hospital staff, many operating on reduced salaries because of spending cuts, worked overtime to tend the injured.

The city’s main festival focuses on St James, one of Jesus’ 12 disciples whose remains are said to rest in the city and who is patron saint of Galicia.

The apostle’s shrine there is the destination of the famous El Camino de Santiago pilgrimage, followed by Christians since the Middle Ages.

The derailment happened less than two weeks after six people died when a train came off the tracks and hit the platform at a station in central France.

That accident may have been caused by a loose steel plate at a junction, French train operator SNCF said.

An official source said no statement would be made regarding the cause of the Spanish derailment until the black boxes of the train were examined, but said it was most likely an accident.

“We are moving away from the hypothesis of sabotage or attack,” he said.

It was one of the worst rail accidents in Europe over the past 25 years.

In November 2000, 155 people were killed when a fire in a tunnel engulfed a funicular train packed with skiers in Austria.

In Montenegro, up to 46 people were killed and nearly 200 injured in 2006 when a packed train derailed and plunged into a ravine outside the capital, Podgorica.

In Spain itself, 41 people were killed the same year when an underground train derailed and overturned in a tunnel just before entering the Jesus metro station in Valencia.

The House of Representatives voted 217-205 to defeat an amendment to the defence appropriations bill that would have limited the National Security Agency’s ability to collect electronic information, including phone call records.

Opposition to government surveillance has created an unlikely alliance of libertarian Republicans and some Democrats in Congress, The House vote split the parties, with 94 Republicans in favour and 134 against, while 111 Democrats supported the amendment and 83 opposed it.

The White House and senior intelligence officials opposed the amendment by Republican Representative Justin Amash of Michigan, which had been prompted by Snowden’s revelations. Snowden, a fugitive from the United States, has been holed up at a Moscow airport for the past month unable to secure asylum.

The House later approved the defence appropriations bill, which included nearly $600 billion in Pentagon spending for the 2014 fiscal year, including the costs of the Afghanistan war.

Republican Representative Tom Cotton, who endorsed the NSA program, described the “metadata” being collected as essentially a five-column spreadsheet containing the number called, the number of the caller, the date, the time and the duration of call.

Cotton, a former Army captain who served in Iraq and Afghanistan, said a comprehensive set of phone call records was needed in order for the program to work.

“If you want to search for a needle in a haystack, you have to have the haystack. This (amendment) takes a leaf-blower and blows away they entire haystack. You will not have this program if this amendment passes.”

But Amash, a conservative Republican, and other supporters of the amendment said the fundamental issue was whether the U.S. government had the right to collect and retain the personal communications data of American citizens.

“Government’s gone too far in the name of security,” said Representative Ted Poe, a Texas Republican. “Rein in government invasion, no more dragnet operations, get a specific warrant based on probable cause or stay out of our lives.”

Representative Joe Barton, another Texas Republican, said the issue was not whether the NSA was sincere