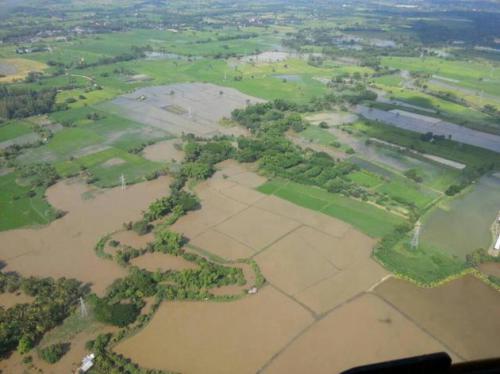 
Flooding in East worst in 50 years: Plodprasop
The Nation / Phuket Gazette
PHUKET: Flooding in Phimai district in Nakhon Ratchasima, one of the hardest hit areas, is expected to peak over the next few days.

“At this point, I am most worried about Phimai,” Water and Flood Management Commission chairman Plodprasop Suraswadi said yesterday.

Phimai was in a low-lying zone and would take in run-off water from nearby areas, he said.

Plodprasop, who is also a deputy prime minister, said the East was facing its worst floods in 50 years.

Floodwater recently swamped some public areas of the Amata Nakorn Industrial Estate in Chon Buri, a part of the East. While no factories have been inundated, the flooding forced some companies to suspend operations as workers found it hard to get to work.

Plodprasop said that although the flooding situation in the East was like the big flood in 2011 in many ways, collaboration between the government and the private sector plus their growing experience had allowed all stakeholders to protect economic zones.


Big fire behind Walking Street in Pattaya
The Nation / Phuket Gazette
PHUKET: Five commercial buildings including a construction shop were damaged by a fire that broke out yesterday afternoon in the Walking Street area in southern Pattaya.

But there were no deaths and just one man – a rescue worker – suffered a minor leg injury.

The total damage bill was initially put at over Bt10 million.

The fire started at about 3pm in a back storage room where thinner and other highly flammable chemicals were stored. There were reports of explosions, which attracted about 30 fire engines and many fire fighters to put the fire out.

It took them two hours to get the blaze under control.

Phuket’s biggest ever fire at the main SuperCheap store has finally been extinguished and the area sealed off for 45 days, pending probes by police and other agencies and a clean-up by municipal officials.

So far, all people reported missing at the time have been found and a search of 95 per cent of the site has not revealed any bodies.

A meeting, presided over by Phuket Governor Maitree Inthusut, was told some 67 affected people had registered for help.

Phuket official Suwimol Saelim told the meeting that the store was insured for fire with two companies for Bt620 million in total.

The court found that the charges in his indictment for directly causing death through carelessness were unclear and lacked evidence.

However, the verdict also upheld a lower court decision, reached in September 2011, which sentenced Bunchoo Laoseehanart, executive of Focus Light Sound System, to a three-year imprisonment term without suspension.

Bunchoo was held responsible for the use of pyrotechnics in the upscale pub that resulted in the fire.

The court ordered Bunchoon and the company to pay a total of Bt8.7 million to families of some fire victims. Bunchoo has been released on a Bt500,000 bail guarantee.

The Appeals Court judges said Wisuk’s failure to provide adequate fire-safety equipment in the pub, located off Soi Sukhumvit 33, though in violation of the 1979 Building Control Act, was not a direct cause of the fire.

The prosecution lacked evidence to support an allegation that more than 500 revellers were allowed inside the pub in violation of the legal limit, the judges said.

Malee Thanompanyarak, a relative of a victim, expressed surprise over what she dubbed “an about-turn” in the sentence. The unlawful lack of fire-safety equipment cited against the owner in the Bangkok South Criminal Court verdict was simply overlooked by yesterday’s verdict, Malee said.

A survivor, Rattana sae-Lim, whose face and upper body were severely disfigured, said the verdict was a huge letdown. She is still pursuing Bt8 million in damages in a civil class action filed against all defendants by 47 co-plaintiffs who are relatives or representatives of the dead or injured victims.

The verdict elaborated on evidence against Bunchoo in upholding the sentence and an order that he pay compensatory payment. But it said testimony against Sarawut Ariya, singer of the musical band Burn, was contradictory and inadequate. Sarawut’s band was playing live music prior to the pyrotechnics. He was acquitted of lighting the fireworks, upholding the lower court’s decision to give his evidence the benefit of the doubt.