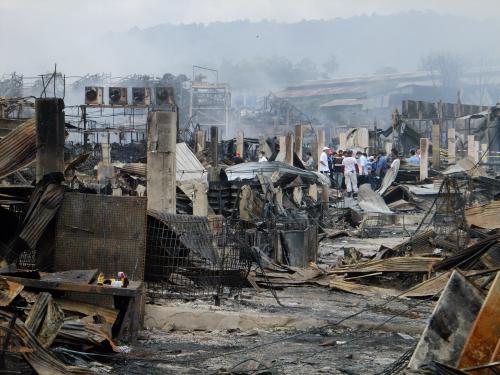 No proof of any fatalities were recorded or announced (story here).

“I received the report form the Department of Disaster Prevention and Mitigation Phuket office [DDPM-Phuket] concerning the SuperCheap fire. I am pleased to announce that all missing people have been accounted for and that not a single life was lost in the flames,” Governor Maitri said.

“All those involved in the rescue efforts and post-disaster work deserve a round of applause – everything was handled very well,” he said (story here).

Gov Maitri appointed himself the single source for information regarding any alleged deaths in the incident.

He has been backed by Phuket Provincial Police Commander Ong-art Phiwruangnont, who warned that anyone spreading false rumors about deaths in the incident could face swift police action.

The DDPM-Phuket report was filed directly to Governor Maitri.

Anong Khunpetthongrat, the mother of a missing 18-year-old cashier who worked for SuperCheap, confirmed to the Phuket Gazette today that her daughter had been found.

However, she quickly hung up and was unwilling to take any further calls regarding what happened during her daughter’s multiple-day disappearance (story here).

A team of Region 8 Forensic officers reportedly sifted through the entire 30-rai site in less than five days, searching for human remains and evidence that might identify the cause of the fire (story here).

“The forensic team has all the evidence they need. The team narrowed the origin of the fire down to a 1,200-square-meter area about 200 meters from the main entrance to the complex. The area stored foam and other construction materials,” Gov Maitri said.

The evidence was quickly spirited off the island.

“It was taken to Surat Thani for further investigation,” Gov Matri said.

SuperCheap representatives today reported that 60 per cent of the staff who worked at the megstore had rejoined the workforce.

Those who had yet to register to re-claim their jobs with the company had until November 1 to do so, said human resources chief Sirirak Kongkum (story here).

“So far 100 Burmese workers have resigned,” she added.

No SuperCheap representative clarified to the media whether or not all staffers were accounted for post-disaster.

However, Suwimon Saelim, acting director of the Phuket office of the state-run Insurance Commission, confirmed the fully insured megashop is covered for over 600 million baht in insurance payouts.

“KSK Insurance can pay out up to 248 million baht in fire insurance, 21 million baht for insured machinery and 3 million baht to injured people who are not on staff,” Ms Suwimon said.

“Another policy under Thai Insurance Co Ltd offers coverage of up to 372 million baht for fire insurance.”

Despite the devastation caused by the fire, SuperCheap did not lose all of its warehouses in the blaze.

“We have five warehouses left, which are storing furniture, Nestle beverages and rice, and we have our ‘Chang’ and ‘L’ warehouses,” said Anongnart Suksaeree, chief accountant of SuperCheap*.

“At this stage we cannot estimate the cost of the damage,” Ms Anongnart said.

No insurance money has been set aside to cover any staffers who may come forward with injuries from the event or for damage done to neighboring houses.

A third company, Crawford Insurance from the United States, has been hired to survey damage to surrounding structures.

“We received 67 complaints for damage caused to houses nearby and a shopper who paid for products, but was unable to retrieve them before the blaze,” Col Peerayuth said.

It was also announced today that most environmental threats potentially posed by the disaster had passed (story here).

“Rassada Municipality has declared the air and dust pollution gone. It also said some of the garbage has already been sent to the incinerator,” Gov Maitri said.

“Wastewater is the only problem that remains and at this stage the municipality will just use EM [effective micro-organisms] and quicklime to stop the bad smells emanating from water courses in the area,” he added.

* Ms Anongnart was originally misquoted as stating that SuperCheap still had Chang beer in stock, rather than the warehouse “Chang” being unharmed by the flames.