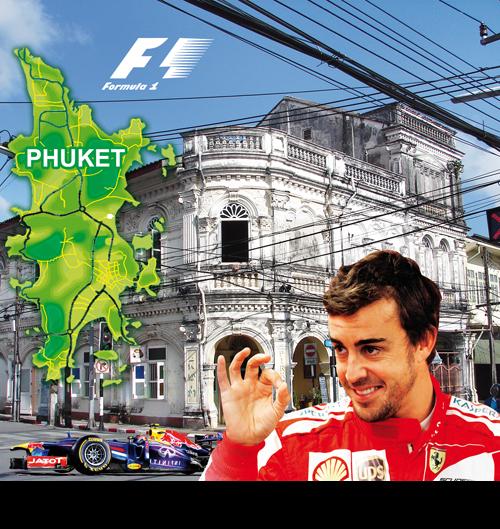 PHUKET: The proposed Bangkok Formula 1 Grand Prix has been scuppered by a new law prohibiting racing in the city’s historic quarter. Strange?

Well, Phuket looks like the leading contender to host a Thailand GP, if it goes ahead, and rumours have for years abounded of a track in the north of the island. Other Thai destinations have been mooted, but how many could provide the facilities?

Just the teams and the media would probably account for 2,000 hotel rooms, and if the island only received 30,000 raceday fans it would be down with troubled Bahrain; 50,000 fans would be reasonable, and success would be 100,000. Phuket has 30,000 official rooms; it can manage, with an overflow in Krabi and Khao Lak if necessary. The Korean F1 will certainly have sensitised Formula One to the issue.

A race could be staged in two years if well planned, so Phuket could be a contender for 2015, but it needs to start now.

Mr Anon from the Ministry of Sport and Tourism told the Phuket Gazette: “The decision about the place to have F1 has not yet been made. Now there is no movement for this issue.” So it looks as if nothing formal has yet started.

Ideally, F1 would probably like a March or April start date, where Sepang and Shanghai now sit, but a September/October date around Singapore, Japan, South Korea, and India might well be negotiable. That would suit the hotels, but it means the likelihood of a rainy race.

If it were to be a road race, or partial road race, it needs to be somewhere accessible from the main hotel and airport locations; the north or center of the island. The affect on an already overloaded infrastructure would be dramatic, and it is hard to imagine Sebastian Vettel negotiating flooded potholes.

I cannot believe that Phuket could sacrifice the highways, the backbone of the transport system for the race. Phuket Town does not look race-friendly, and access is difficult.

So we are left considering Patong, which would provide a great backdrop. That would be more like a Monaco race, Patong would effectively be closed for large chunks of three days, and gate-fees would be very hard to manage.

The alternative is a track. I will stick my neck out and say that typically a purpose built track would need about 2,300 rai (900 acres) and cost about US$400mn. That’s not easy, and environmental impacts need to be managed, but with will it is possible. At most a capacity of 150,000 would be needed, and it could be 50,000 in the first year. Phuket would need to hold a night race to accommodate European TV schedules, so the lighting infrastructure costs would be high.

F1 cannot risk cars travelling at 300 km/h suddenly being plunged into darkness. The Singapore GP uses three megawatts; 1,500 lighting projectors powered by 24 generators, rigged in pairs. Should one generator fail, the load is instantly taken by its twin powerful enough for the whole race.

Then there is the question of getting fans in and out of the circuit from the hotels and airports. Abu Dhabi built an eight-lane highway and bridge as the access road. The public finance of access roads has been a vexed question at venues from Silverstone to Austin.

It has been written elsewhere that Grand Prixs are run in sophisticated cities with efficient public transport systems. That is not entirely true. South Korea International Circuit is 400 kilometers from Seoul; Silverstone is 120km from London; Spa is 60km from Liege; Circuit of the Americas is 20km outside AustinTexas; Nurburgring is 70km from Cologne; and Sepang is 60km from Kuala Lumpur, albeit convenient for the airport.

Be that as it may, most spectators will of necessity be relying on Phuket’s celebrated public transport system, and that would be a special challenge. Undoubtedly there would have to be public sector investment in transport infrastructure.

The benefits for the tourism industry here would be significant, but assessing the value of the event is complex. There may be no increase in airline arrivals or hotel room-nights because of the race. These much vaunted numbers mean little, because hotels and airlines discount their rates during lean periods and increase them when demand is high to maintain occupancy. So the question is, will average tourist consumption increase?

Airlines may not be able to increase rates, but hotels certainly would, and restaurants, bars and shops would benefit.

Around the world, F1 circuits themselves do not really make money, for reasons discussed in an earlier article. Singapore for instance is rumoured to lose US$150mn annually. Phuket would need a sponsor with deep pockets. Red Bull fits the bill. It has a stake in F1, is Thai, and has the contacts to bring other sponsors and the government on board.

F1 will require a host fee from the race. For the sake of argument, let us guess $30mn. And the circuit will probably get no money from trackside advertising, TV fees, or corporate hospitality. The circuit would spend perhaps $15mn marketing the event, and its costs of running the track would probably be $20mn per year from what I know of other tracks. So it has an annual commitment of say $65mn.

The circuit would expect a range of tickets and some multi-day income. I am guessing an average gate-receipt of $250, and catering profits of $20 per person, say $270 per person in total. That would be $13mn income with conservative attendance estimates. So the circuit would reasonably be expecting to recoup its marketing costs, but not its operating costs. Of course, other racing events would raise additional income during the year, but those deals have to be negotiated as well.

There could be ancillary attractions on the site such as a Red Bull theme park, simulators, track-drives, hotels, air strip, marina, residential area, and other F1 themed attractions, with year-round income. But in any case, I guess the circuit would be looking for support from sponsors and the government of over $100mn in the first year, and similar amounts for some years thereafter.

Looking at the economy of Phuket, I have read that the local business community can expect increased consumption of $600mn from an F1 weekend. That would require 100,000 people spending $6,000 each over three days over and above what other low season tourists pay. That looks unlikely to me. Phuket might reasonably target 50,000 fans the first year, plus the circus itself, injecting over $100mn to the economy. It could be double that in later years.

In addition, there would probably be 200-400 permanent jobs created, and most importantly, the value of the Phuket brand, significantly eroded over recent years by cheap tourists, could be significantly increased.

There is probably no other destination in Thailand with such brand-value-added potential.

It is an interesting proposition, but it depends on having a really committed sponsor.

All I can say is, I really look forward to meeting you at Phuket’s Red Bull Stadium in 2015!