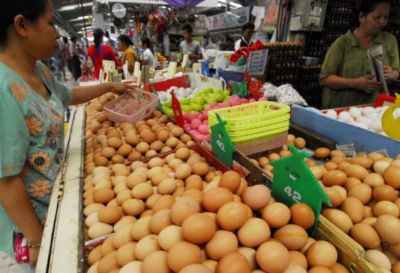 PHUKET: Most respondents, 61 per cent, in a poll on the current cost of living in Thailand said they were not confident in the government’s measures to handle the country’s rapidly rising cost of living, according to a Bangkok University poll.

Only 39 per cent of the respondents thought otherwise.

The survey, titled “People’s Reflections on the Current Costs of Living” was conducted among 1,203 people in metropolitan Bangkok, with 76 per cent of the respondents saying that the prices of current consumer goods impact the wellbeing of their families, while 24 per cent said they don’t feel the pinch.

But more than half – 53 per cent – said that they could not make ends meet, and more than one in five – 22 per cent – needed to use their savings for day-to-day expenses. Meanwhile, 16 per cent said they had to borrow money to make ends meet.

The poll found that 15 per cent had to seek a second job or work overtime to boost their income.

However, when asked about the Yingluck government’s performance, the respondents were evenly split, with 50 per cent saying the government is paying attention to solving the cost of living problem while the other half said it does not.

Nearly one-third, 30 per cent, said they wanted the government to keep goods prices under control to prevent further increases while 17 per cent suggested the prime minister herself should look into the problem.