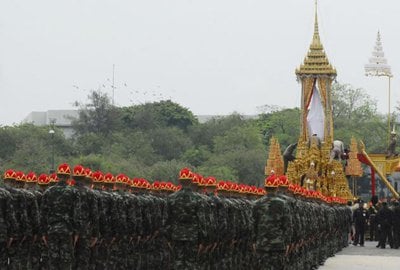 Ceremony rehearsal
PHUKET (The Nation): Soliders marched during the second major rehearsal yesterday of the cremation of HRH Princess Bejaratana Rajasuda at Sanam Luang on April 9.

The Maha Pichai Ratcharot chariot will carry the royal urn. Princess Bejaratana, the only child of King Rama VI, passed away at the age of 85 last July.

The main pavilion, crematorium and other buildings will be open for the public to visit on April 11-17. A permanent exhibition in honor of the late princess will be installed at Nakhon Pathom’s Sanam Chandra Palace, which was built by King Rama VI.

Paper flowers, known as Dokmai Chandra, for mourners to use in paying their last respects to the late princess, will be accepted at the five pavilions – three on the grounds of Sanam Luang, one on the sidewalk opposite, and one at Chang Pier. Flowers will be accepted at 46 temples in Bangkok and at temples across the country, with one being designated in each province. The designated temple for Phuket will be announced shortly.

The late princess’ ashes will be collected on the morning after the April 9 cremation and escorted to Dusit Maha Prasart Throne Hall. On April 12, a ceremony will be held to mark the ashes’ permanent placement in the Throne Hall.