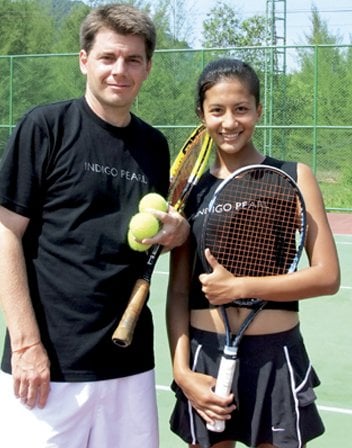 PHUKET: Tennis played well at any level is an enviable pursuit. Those with the physical skill and coordination required to spot a ball traveling in excess of 100 miles per hour, then choose a shot before returning the two and a half inch diameter projectile over a three foot obstacle and land it accurately within a 27ft by 39ft area, deserve admiration. To do it repeatedly over an hour or two requires abnormal focus, and to become a world champion simply defies belief.

Sumitra “Dear” Basnyat is such a talent. This Phuket tennis prodigy presents herself with a grace and maturity that belies her 15 years of age, while her focus and intelligence when she speaks of her chosen sport is a joy to absorb.

Dear and her ‘adopted tennis family’ kindly arranged to speak with the Phuket Gazette over the sumptuous Sunday Brunch at Indigo Pearl recently to help highlight her quest to be a tennis professional. Indeed, it is Indigo Pearl’s GM Kelly Lewis, his family and staff who are championing young Dear in her endeavors.

“Dear’s coach Darran Ferre came to work for the resort and brought her to train at our tennis facility. After seeing her play we knew she could do well and decided to offer support,” Kelly said.

Living near Phuket Town, Dear makes her way to Nai Yang on a daily basis to go through her drills with Darran, and when possible helps out at the resort with kids’ coaching and has even been known to take on a few guests at the resort who are willing to pay for the pleasure of being soundly defeated by the young tennis star.

Speaking with Dear, it becomes evident that she has the mental toughness that top modern sports players require. Her words are deliberate and exude a strength that originates from playing a game requiring a belief in one’s own ability.

“I try not to think about things in the game that I can’t control. ‘Unproductive worries’ we call it. Off court, I meditate and keep my mind clear and try to master the game. I don’t mind losing a game physically, but to lose a game mentally is more damaging to me,” Dear said.

“Patience is very important. For me it’s about who is more willing to do the right thing… who can keep it together for the match, and I try to put my strengths against my opponent’s weaknesses. I reckon I’m more of an adaptive player than others who just try to dominate the competition,” she added.

Darran Ferre offered more insight into his charge’s background and future, beginning with how their relationship began.

“Dear came through a community based program set up shortly after the tsunami. She was initially part of a large group who I taught regularly, and then became part of a more select group once my involvement with Indigo Pearl started,” he said.

Once Darran had seen her play and Dear herself realized that while her friends had tired of the sport, she was still interested and becoming quite good at tennis.

“I have been teaching for 20 years, and, simply put, she has more self-motivation and drive than anyone I have taught. She is willing to make the necessary sacrifices and has the determination to succeed. This is what sets her apart,” Darran said.

As with Dear’s attitude, Darran believes her physical strength will develop, but now is the time to reinforce her mental abilities.

“It is now time to focus on learning how to handle pressure and keeping things simple when on the court, and to not get distracted,” Darran advised.

All young players have their role models or idols and Dear indicates that Novak Djokovic is a player she admires. However, Darran suggests Dear is reminiscent of Chris Evert.

“Like Evert, she has nice balance, solid ground strokes coupled with very good control, and a creative, all-court game. And, unlike many girls her age, she also plays excellent doubles,” Darran enthused.

“Dear’s intention is clear, and that’s is to be a great tennis player, but as with all sports hopefuls the road is long and arduous, but made a little smoother with support from family and friends.

“Having the backing from Indigo Pearl gives her a feeling of security and that is a great feeling to have when you are that young.

It is vitally important as we go through each stage of her development that Dear feels unconditional support, as that will relieve any possible pressures. Indigo Pearl over the years has become like extended family,” Darran said.

It was important for Kelly to also add that while Indigo Pearl is doing as much as they can, Dear still needs as much financial support as possible.

“We provide as much as we can for Dear and we will continue to drive and support her. Head is her sponsor for equipment and we provide clothes and a training facility, but it comes down to money for travel to tournaments That’s why we reached out to the Gazette to see if we can generate interest in Phuket to promote her career,” Kelly said.

There are many worthy causes around the island and Dear’s may not be the most needful, but here is a talent that deserves to go far. And wouldn’t it be magic to see a genuine Phuket homegrown sports talent push through the ranks and win at Wimbledon?