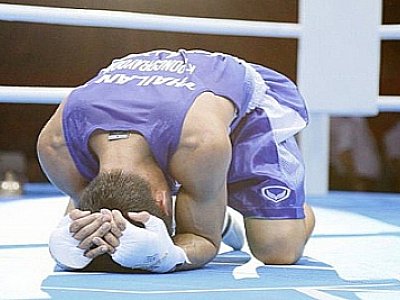 
Opinion: He’s not the first to see injustice
The Nation
PHUKET: Veteran Kaew Pongprayoon is not the first and possibly not the last boxer to fall victim to controversial refereeing decisions, providing further evidence there is urgent need to change the International Boxing Association (AIBA)’s obviously flawed judging system.

China’s Zou Shiming was declared winner in the light flyweight final of the Olympic boxing competition. Ironically, it was the Thai fighter who was afforded the bigger applause from the Excel Centre crowd for at least showing more desire to box, while a round of boos accompanied the Chinese as he left the ring.

The incident undoubtedly did not do any favors for the world governing body AIBA, which has already been struggling to improve the image of a sport tainted by a series of debatable decisions. Such problems have become even more evident in the international arena, given a long list of well-publicised controversial results.

The most notable incident was in the 1988 Seoul Games when a young Roy Jones Jr had every right to feel he was robbed of a win against home fighter Park Si Hun. The statistics of the bout – 86 compared to 32 – were clearly in favour of the American, who went on to become a multi-weight world champion. One judge admitted afterwards that the decision was a mistake and all three judges ended up being suspended.

Curiously, despite being aware of a question mark hanging over the credibility of the sport, the AIBA still adopted a judging system for the London Games that barely made it more transparent. The score was shown at the end of each session, unlike in the previous Games in Beijing four years ago when it was displayed throughout each round.

What happened in boxing was in contrast to taekwondo, the discipline that has also faced questions about its integrity in the past. However, the controversy arising from some dubious officiating in the Beijing Games prompted the governing body, the World Taekwondo Federation (WTF), to overhaul its antiquated system of scoring punches and kicks by introducing electronic scoring and video replay. As seen in London, the trainer of each athlete now has the right to challenge a decision once in a bout, and the officials can then decide on a video review of the incident in question.

Indeed, there was a sign of what was to come in London when the BBC broke a story that Azerbaijan was alleged to have made an attempt to bribe AIBA officials in exchange for two gold medals. Even though the International Olympic Committee found no evidence of a bribe, the event – in the bantamweight bout involving an Azerbaijan fighter – did not do the credibility of the sport any favours.

Magomed Abdulhamidov initially won the fight, much to the surprise of people who watched the encounter in which the Azerbaijani was sent to the canvas six times by Japan’s Satoshi Shimizu. The result was then overturned and the referee from Turkmenistan, who officiated in the fight, was sent home.

Unfortunately, the Olympic boxing competition will again be remembered most for some questionable decisions rather than the boxing performance itself. The question is how long the sport will stay in the Olympic programme if such problems remained unsolved.