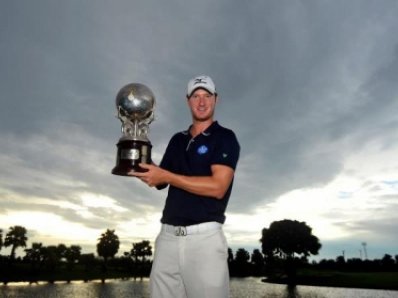 PHUKET: Englishman Chris Wood claimed the first win of his professional career yesterday with a two-shot victory in a rain-interrupted US$1million Thailand Open, breaking the hearts of home fans hoping for the first Thai champion in eight years.

Thais Arnond Vongvanij and Wisut Artjanawat battled to catch Wood, but had to settle for a share of third place with Korean Lee Dong-hwan .

Alone in second was Jang Dong-kyu, also of Korea, who completed the first nine holes in just 29 shots to card a closing 63 and the best result of his career.

“It is brilliant – I am really, really pleased,” said Wood, after what appeared to be a victory march from the 17, which was interrupted by a rain delay of over an hour.

“It is hard winning. I always felt that once I got one win it would give me the confidence to go on and win more. So, hopefully I can take this confidence back to the remainder of the tournaments I have got for the season.”

Wood, one of five European Tour regulars competing in the event, was four under after six holes, but gave his rivals a glimmer of hope with a bogey on the eighth.

At the 11th, however, he put one hand on the winner’s cheque of over US$181,000 with a birdie putt of around 30 feet – and effectively pocketed it with an even longer effort on 15.

“It was a tough putt, but I putted really nicely this week.

“I think I have turned the corner in my putting, which has let me down all season. I have been playing as well as I have done this week but without converting chances. It is nice to convert a few. I always knew once I cracked the putting I would be winning and this week proved my point,” he said.

Thailand has not produced a home winner of the National Open since Boonchu Ruangkit won his second in 2004, and the only other local winner of the event, Suthep Meesawat (1991), was at the course to watch his son, Prom, try to emulate that feat.

The “Big Dolphin”, as Prom is known locally, was in the lead after two rounds, but could go no better than par over the weekend to slip down the leader board.

His close friends Wisut and Arnond took up the challenge, but the pressure of winning a trophy with spiritual significance for Thais because it was donated by the much-revered King, proved too much.

“Just a few players played a little better than I did, so [there are] a lot of positives to take away from the Thailand Open,” said Arnond, who went to college in the United States.

“I birdied the first three holes on the back nine and I did start to think at that time that I could win, but the thoughts disappeared pretty quickly.

Wisut, winner of the ASEAN PGA Tour Order of Merit last year, was also buoyant despite missing two putts on the last two holes that could have made all the difference.

“I can’t complain as this is my best ever result in a tournament at this level,” said Wisut.

“I am very happy as my game is really improving and this week will give me a lot of confidence to continue to produce results like this. It is a breakthrough for me.”

At four under, the cut was the lowest in OneAsia’s history – reflecting the strength of a field that was also bolstered by the presence of 20 Japan Tour players as part of a growing relationship between the two circuits.

Thai Open winner Wood turned professional in 2008 after finishing fifth in the Open Championship and then underscored his potential by bettering that the following year when he just missed out on making a play-off with Stewart Cink and Tom Watson at Turnberry. With a second and third place finish on the European tour this year, it was only a matter of time before he broke his duck.

Thailand Open defending champion Andre Stolz of Australia, who went on the win the OneAsia Order of Merit title last year, finished at eleven under after closing with a 67, his best round of the week.

The day belonged to Wood, who plans a break with his family to celebrate the win.

“I am going home for a week, a bit of rest, share it with my family and then onto Gleneagles in Scotland for a tournament,” he said.