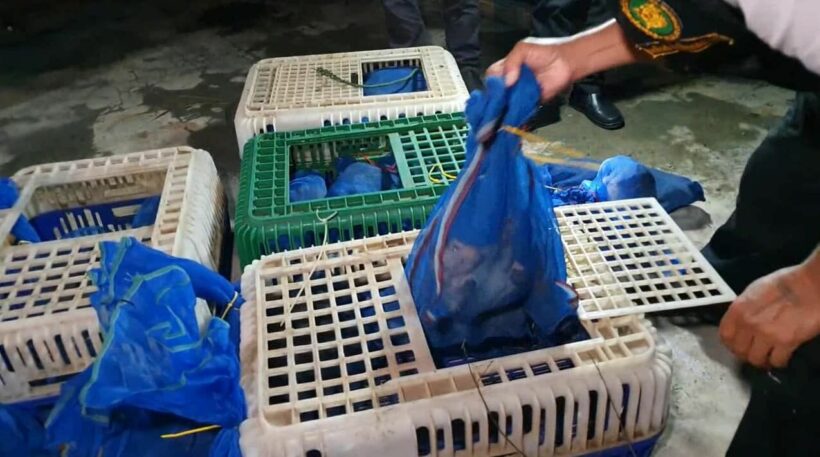 More than 100 baby macaque monkeys were found at an abandoned home in Saraburi, some tied up in bags. One was dead. Some locked in plastic carriers were weak from hunger and thirst. Police suspect the home was being for storage by a wildlife smuggling gang preparing to transport and sell the monkeys across the border where the animals would be cooked as exotic dishes.

A local found the monkeys and called authorities. Officers from the Phra Putthabat Police Station and a rescue team searched the abandoned home off Phu Khae – Lomsak road in Saraburi. Some monkeys were outside the home, while some inside were trapped in bags or carriers. Around 30 monkeys were tied in bags. Other monkeys were locked in plastic carriers.

Police suspect the monkeys were destined to buyers in other countries where they would be served in restaurants as exotic dishes. Officers are still investigating. Those who are caught face charges of animal abuse and possession of wildlife without permission, which carry penalties of up to 10 years in jail and a fine of up to one million baht.

Last year, Thai authorities rescued more than 100 monkeys they suspect were destined to be illegally imported out of Thailand to be served in restaurants as exotic dishes.

Jason
When you catch the perpetrator, forget prison...just lock them in the same cage the monkeys were in....
butterfly
8 minutes ago, Smiler said: What sort of person eats monkey as an exotic dish? What is wrong with these people? Chinese market, who else

steve860
7 minutes ago, Smiler said: What sort of person eats monkey as an exotic dish? What is wrong with these people? Don't Chinese eat monkeys? They eat pretty much everything else.

Marble-eye
21 minutes ago, steve860 said: Don't Chinese eat monkeys? They eat pretty much everything else. Only their nuts.
HiuMak
22 hours ago, Thaiger said: More than 100 baby macaque monkeys were found at an abandoned home in Saraburi, some tied up in bags. One was dead. Some locked in plastic carriers were weak from hunger and thirst. Police suspect…