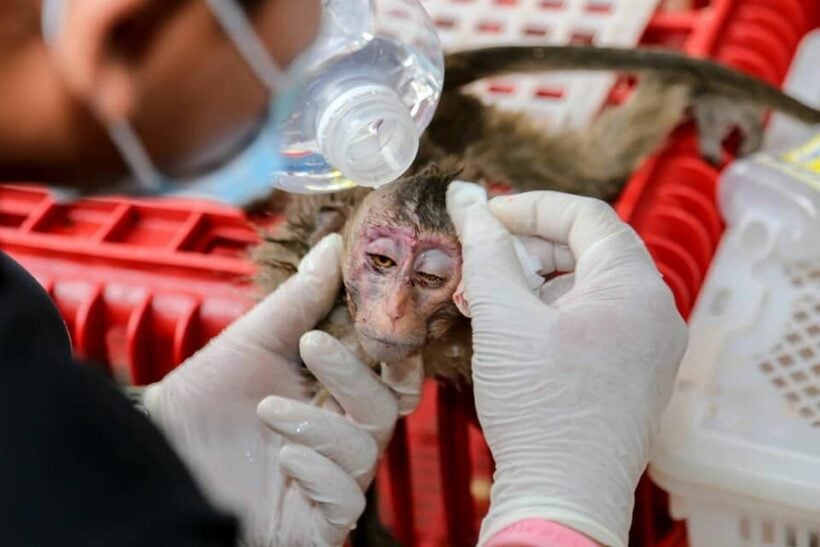 More than 100 wild monkeys caged in plastic carriers were seized off a pickup truck in Prachinburi province. The 25 year old driver was arrested, and allegedly told police that he had been hired by a network that trafficks wild animals to be purchased by restaurants and later eaten.

The 102 monkeys were in poor condition, some with wounds and some in critical condition, according to officials from the Department of National Parks, Wildlife and Plant Conservation, who were called to inspect the monkeys. The cages were cramped and had poor ventilation. Many of the monkeys were suffering from exhaustion.

The monkeys were taken to the Nakhon Nayok Wildlife Sanctuary Office for treatment, but 18 monkeys died and 4 remain in critical condition.

Thailand’s Crime Suppression Division was tipped off about an alleged wildlife trafficking operation planning to transport wild animals in the province’s Sri Mahaphot district. The driver allegedly admitted to police that he had been hired to transport wild animals and was paid 3,000 baht per route. He told police that he was taking the monkeys from Phichit, in the lower Northern region, to Sa Kaew, which borders Cambodia.

The driver was allegedly hired by a network who procures the animals and trafficks them to restaurants. He faces charges for violating the Wildlife Conservation and Protection Act. Officers are now investigating to track down the leaders of the trafficking operation.

King Cotton
When I first saw the headline, 'Police seize more than a 100 monkeys', I thought they must have raided Parliament.