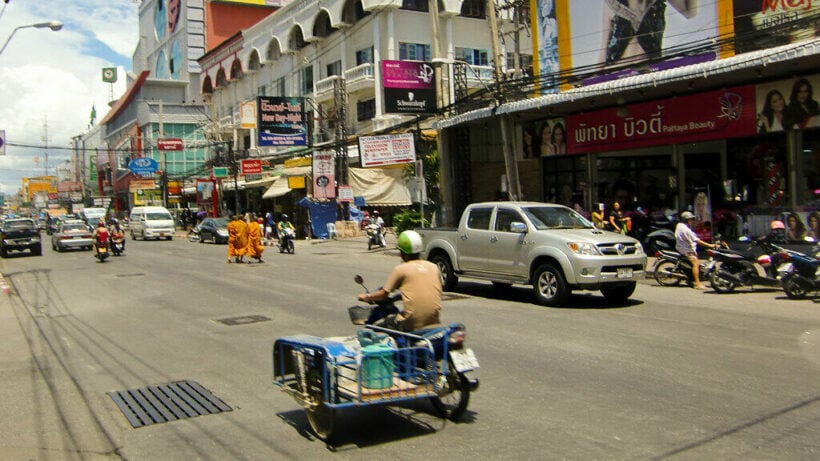 Last night, a German man lodged a complaint with police about his suspicion that a prostitute pickpocketed him.

68 year old Thomas Hatesaul alerted police at 11:30 pm that he was robbed on Soi 13/1 Pattaya Beach Road in Nongprue. He told police that he was walking by himself, to relax when he was approached by a woman. Thomas says the woman was wearing a sexy dress and approached him “aggressively”. He alleges that she hugged him and offered to exchange sexual intercourse for an undisclosed amount of money. The German gentleman says he turned down the offer.

Thomas adds that he walked away from the brief exchange and found he was short 15,000 baht. The money’s previous home was in his pocket.

Currently, police are consulting CCTV in the area to locate the suspected prostitute and pickpocket. Thomas adds, for some reason, that the woman who stole from him was not transgender.

Pattaya police consider catching the suspected prostitute (or streetwalker, nightwalker, or sometimes, cocotte) is a priority because the crime could tarnish the good image of Pattaya, which tourists and foreign hold in high esteem. The police did not elaborate on what Pattaya’s public perception is.

However, in 2019, officials inspected Pattaya’s walking street and determined there were no prostitutes and maintained that Pattaya’s reputation as a World Class Family Destination was still intact.

Prostitution is illegal in Thailand.

JohninDublin
23 minutes ago, MikeW said: The last time I used mine at a Bangkok bank atm it was 250  Now you mention it, I actually think I might have paid 150.  It's a long time since I used an ATM in…

PapayaBokBok
7 hours ago, JohninDubin said: Are you serious? Last time I used an ATM there, there was a 300 THB flat rate charge on foreign bank cards. By the time you've drawn 2k, you've lost 1200 more protecting it. For that…

PapayaBokBok
6 hours ago, MikeW said: The last time I used mine at a Bangkok bank atm it was 250  Im lucky to have a thai bank now...def helps

JohninDublin
31 minutes ago, PapayaBokBok said: agreed. the fees are insane. I was lucky enough to have worked in LOS so I have a bank of bkk account. I bring a few 1000 in my zipped pocket when I come back…
MikeTexas
Walking by himself through Pattaya "to relax."  Well played sir!  He might have been drinking beers because he was dehydrated or talking with the prostitute because he had become lost and needed directions.