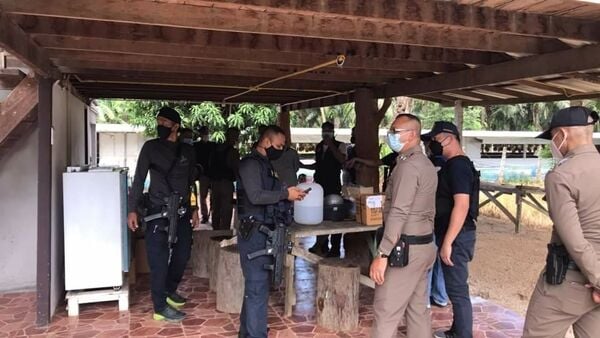 A man in Krabi was arrested after he allegedly fired a gun, shooting through a window of an alternative state quarantine, or ASQ, hotel and ran off with his wife and 9 year old son who were staying at the hotel after coming in close contact with those infected with Covid-19.

Reports say Somyos returned 15 minutes later with a gun. He went to the lift to go to the rooms where returnees were staying. When hotel staff tried to stop him, he fired his handgun, shattering a window. Allegedly, he went up to the room where his family was staying and led them out.

Somyos was later arrested near his father’s pig farm in Krabi. Reports say that right before his arrest, Somyos shot a worker in the leg at a chicken farm near his father’s property. Lam Thap Station police also seized a .38 revolver with 5 bullets and an 11mm handgun with 6 bullets.