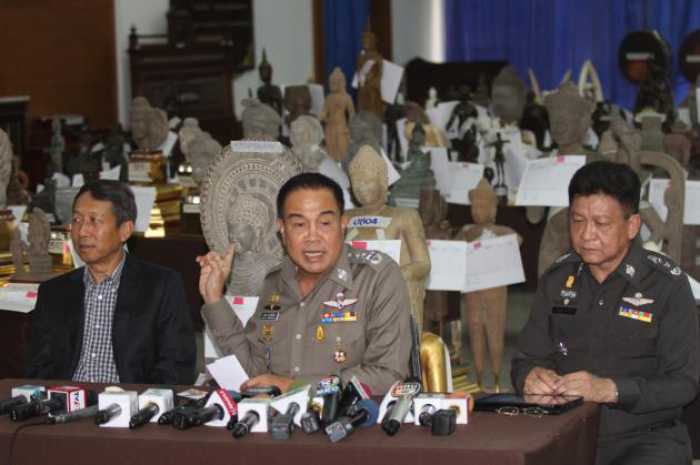 They are now in the custody of Phra Khanong police in Bangkok.

Gen Somyot said more people involved in this scheme – he didn’t specify the number – would be arrested if or when evidence implicating them became available.

He had earlier dismissed as rumor unconfirmed news reports that some 40 senior police would soon be summonsed for alleged involvement with Gen Pongpat, who is now in custody.

An investigation into this issue was underway. If or when the summonses were issued, it would be known publicly, he said, adding: “Don’t play up this issue so frequently that it disturbs police and distracts them from their work.”

One of the identified suspects, Nattapon, is a former Army major. Royal Thai Police spokesman Lt Gen Prawut Thawornsiri confirmed yesterday that Natthaphol had been stripped of his Army rank and was the same Natthapol among the new suspects in police custody.

Gen Somyot, meanwhile, said he would welcome “tell-all revelations” by former Rak Prathet Thai Party leader Chuwit Kamolvisit about police corruption – if he could back up his claims with concrete evidence.

Speaking at a press conference before Gen Somyot’s remarks, Chuwit said the systematic corruption and fee collection engulfing the former Central Investigation Bureau commissioner involved many more officers apart from CIB deputy chief Maj Gen Kowit Wongrungroj and two non-commissioned officers, all of whom had been suspended and placed in custody.

Somyot later called on Chuwit to fully identify two bureau commissioners he referred to as ‘Kor’ and ‘Jor’, saying it would be easier for police to probe further into their alleged crimes cited by Chuwit.

In Chuwit’s statement, he said a gambling den inside the Colonze massage parlor on Rama IX Road was operated by people who cited backing from the monarchy.

This den generated large profits from gamblers and was able to pay a daily “protection fee” of 20 million baht to the police for nine months of operation in 2001, before it relocated to Soi Ratchadaphisek 18, the same year.

It operated there for 24 days, starting August 1, before it closed down after being exposed by media reports.

He said Gen Pongpat, as CIB chief at the time, was supposedly unable – under a police culture of corruption – to extract the fee from this den without knowledge and approval of the Metropolitan Police Bureau chief at the time.

Chuwit, however, praised Gen Somyot, saying he believed the incumbent Royal Thai Police (RTP) commander was a good person who had good intent in tackling police corruption. The parlor tycoon-cum-politician said the information he released yesterday was based on a document he submitted to the RTP for further investigation. A finding later claimed that no involvement by police was found with this gambling den.

All items, contained in a large number of boxes, seized from various homes of Gen Pongpat, Gen Kowit, and Col Akkharawut Limrat – whose death was cited as suicide – were transported to a military barracks in northern Bangkok, pending identification from Fine Arts Department experts on artifacts.

British man arrested in Udon for sex offences in the UK