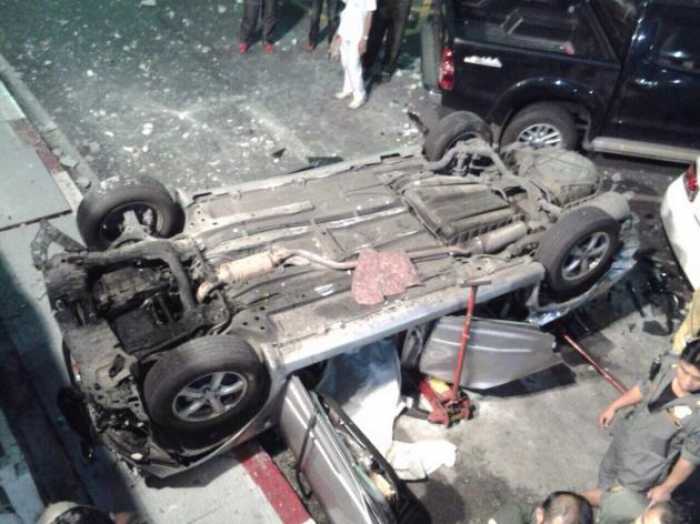 PHUKET: Brake failure has been ruled out as a likely cause behind a fatal accident at a Bangkok shopping mall on Tuesday, a police expert has reported.

Lt Col Somyos Aebniam, an engine inspector from the Traffic Police Division, inspected the car yesterday and found that the brakes were in perfect condition.

“But we will need to examine this further and look at the gear system before making any conclusions,” he said.

Lat Phrao Police Station has called in experts to help determine the exact cause of the accident.

A Honda Stream crashed through the wall of The Mall Bang Kapi’s car park, plunging from floor 3A on Tuesday evening and immediately killing the driver.

“We need to see if the car had any technical problems, which made it difficult for the driver to control it,” Lat Phrao Police Station Superintendent Wittawat Chinkham explained.

The husband of the 35-year-old victim Supaporn Wiangnak had recently taken her car out from a garage.

“It was only put in to replace the engine oil,” Ms Supaporn’s younger sister Saengduan said yesterday, adding that her sister had been using this car for more than six years already.

Pranee Junhom, 46, said she was in the car park when she heard the sound of brakes screeching and noticed it moving in her direction.

“It hit my car before crashing through the wall and falling down,” the witness said. Both Ms Pranee and her daughter were injured in the accident.

Ms Supaporn’s family has ruled out the possibility of suicide.

Her funeral is being held at the Banphentai Temple in Min Buri district in Bangkok, with the cremation set for Saturday