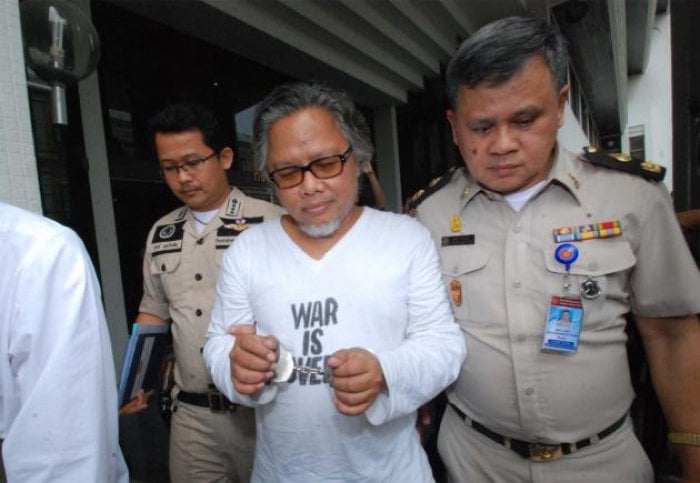 PHUKET: Pro-democracy activist Pansak Srithep was arrested early yesterday and charged with three offences, including violating the order of the military’s ruling National Council for Peace and Order forbidding political gatherings of more than four people.

The military court later granted bail to Pansak after 70,000 baht was used as a guarantee.

The key member of a group called Resistant Citizens, which staged a commemoration of the failed February 2012 elections in Bangkok in defiance of martial law, was arrested just after midnight after he parked his car at a temple near his hone in Nonthaburi.

On March 13, Mr Pansak was briefly arrested when he started a march to call for an end of trying civilians in military courts under martial law.

He appeared handcuffed in court yesterday and his lawyer was briefly barred from speaking to him while investigators interrogated him.

Mr Pansak has also been charged with violation of penal code Article 116, which forbids inciting unrest, and violating the Computer Crimes Act.

Mr Pansak, whose volunteer observer was killed during the 2010 crackdown on red shirts that led to at least 99 deaths, was taken by police for a medical examination before he was detained in order to prevent allegations that he was assaulted or tortured.

He was taken to Bangkok Remand Prison in the afternoon after the military court allowed the first round of 12 days’ detention. Anon posted a bail application of 500,000 baht but there was no word on whether bail had been granted at press time.

As Mr Pansak left the military court, Natcha Kongudom, a Bangkok University student, folded a number of paper planes with the message “no civilians in military court” and threw them near the court. The student was not arrested.