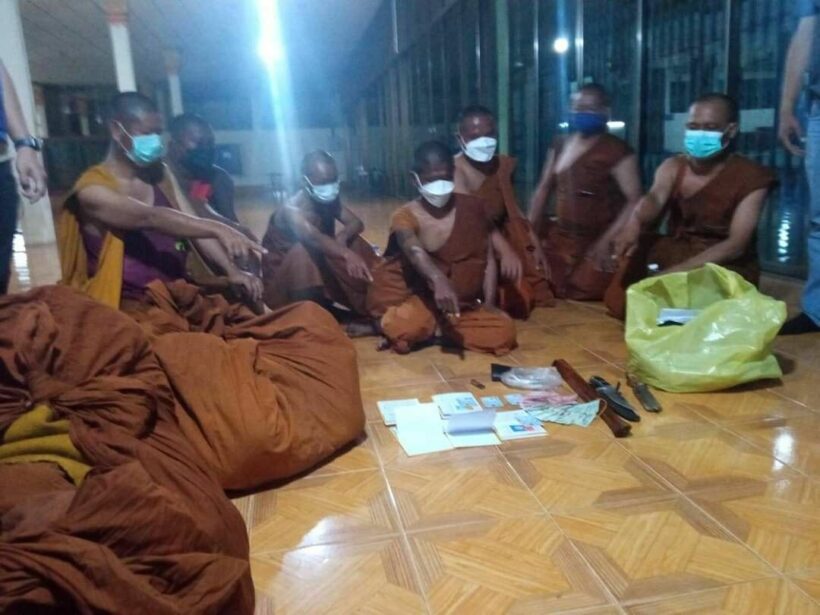 The seven “monks” were seen as unconventional as they refused to accept food and other offerings, and only accepted money. A local monk then reported them to the authorities and told Thai media, the men are dressing like monks, but they are “devils.”

When officers went to investigate, the group reportedly refused to talk and tried to flee. Officers say they were able to seize seven fake monk identification documents, two knives, a wooden stick, money, and monk robes.

The group allegedly confessed that they formed the group in Nakhon Sawan province and bought the fake documents for 5,000 baht last month. They started travelling around, posing as monks and asking for money as the offerings.

The police officers from Klaeng Police Station say the men will face charges for forgery and carrying weapons in public.

riclag
Click comment link from the falang with 1.2 kilo of ya ba comes to the fake monk thread ! come on tiger , you can do better! edit ! Sorry just noticed someone already covered this
TSS
man, the photo of the those cocaine packets. Customs didn't find anything in airport search, but found them the next day. Musta been in another carry on🤯

Guest1
18 minutes ago, TSS said: man, the photo of the those cocaine packets. Customs didn't find anything in airport search, but found them the next day. Musta been in another carry on🤯 Not the next day but(t) after 10 days…

palooka
My understanding of giving monks money is that: They should not ask for money directly, unless at the temple, generally monk day, and it is mentioned in front of the congregation that money is needed for whatever, usually made by…