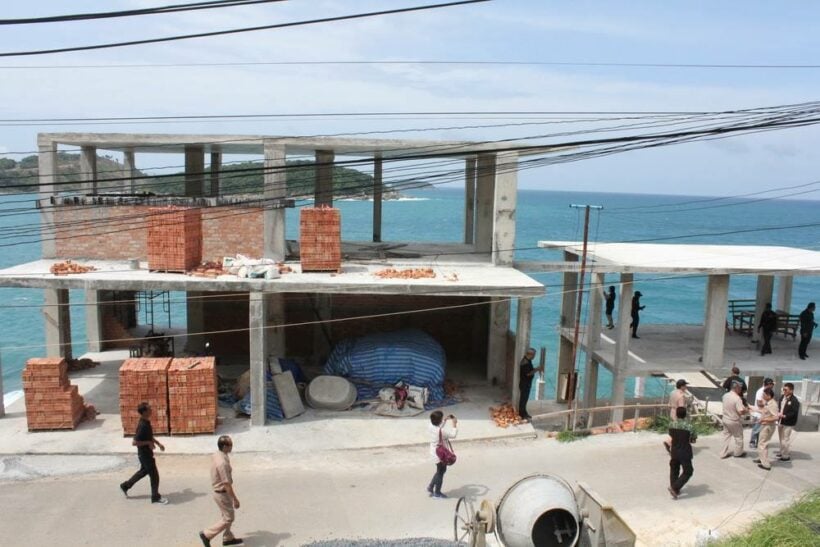 The 12-meter high beach villa project on the cliff at Ao Sane has been proven to be illegal according to the Ministry of Natural Resources and Environment. The owners have been instructed to demolish the upper structure to meet the legal height of 6 meters. Meanwhile, Phuket’s Governor has set up a committee to investigate the Rawai Municipality who issued the building permit.

The picture of the property drew a lot of attention from Phuket locals after going viral on social media who then doubted if it was built legally as it seems to block the sea view on the route from Rawai to Ao Sane and the Laem Krating viewpoint. Governor Norapat Plodthong says that the owner of the project needs to follow the building regulations or face demolition by local authorities.

“The Land Office has confirmed that the title deed is legal. However, according to the report from the Phuket Marine Office, the project is mostly within 20 meters from the highest sea level which only allows a maximum height of 6 meters and is restricted to single story only. Some parts of the project are located further in Zone 2, which is categorised as being 50 meters away from highest sea level and would be allowed a maximum height of 12 meters if it is a single house design.”

As the entire project reaches about 12 meters in height, part of it will be required to be removed.

“Rawai Municipality is responsible for suspending the project until the owner of the project follows the building codes, especially the height of the buildings that can only be 6 meters high.”

So far, the municipality has ordered the project to be suspended and asked them to comply with the law within 30 days.

“If the project doesn’t comply and make a change to the height within 30 days, all departments concerned in the case will be subject to a lawsuit. The Rawai Municipality who issued the 30 days suspension will be authorised to demolish the construction.”

A committee is also being set up to investigate how the building was issued a permit by Rawai Municipality.

The luxury project is reported to belong to a Bangkok millionaire, Ong-art Thongpetburapa, who owns several businesses in the capital and who wanted to make his own private villa on the hills.

A native from Phuket, Nattha is an experienced journalist who graduated from Journalism and Mass Communication at Thammasat University. She has acquired seven years experience as a Journalist and Content Writer for local and national newspapers and magazines, focusing on news, lifestyle and investigative articles.

Supreme Court Judges under protection in lead up to Yingluck verdict