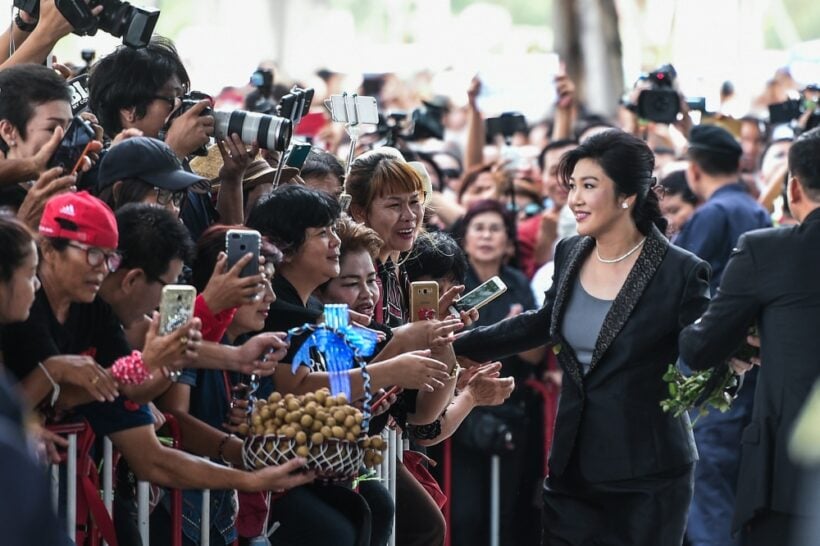 Security officers will be sent to guard judges in the high-profile case involving former prime minister Yingluck Shinawatra to maintain order ahead of the announcement of a verdict.

The panel of nine judges hearing the case in the Supreme Court’s Criminal Division for Political Office Holders, and their residences, will be under guard until after the court delivers its verdict on August 25.

The order came after Army chief General Chalermchai Sitthisart, who is also head of the Peace and Order Maintaining Command, yesterday called a meeting of security forces to assess expectations about the situation on the day of the verdict.

Yingluck has been charged with negligence in preventing corruption and irregularities related to her government’s rice-pledging scheme, which allegedly caused massive financial damage to the country.

Authorities have been closely monitoring movements by Yingluck’s supporters ahead of the verdict.

The meeting concluded that supporters would mainly come from outside Bangkok, including Pathum Thani, Nonthaburi, Samut Prakan and Ayutthaya provinces, where there are strong bases of Pheu Thai Party and red-shirt supporters, according to a source at the meeting. The source said security officers had been instructed to closely monitor local leaders in other areas in the North and Northeast who might mobilise supporters.

Security forces have estimated that 1,000 to 2,000 people will show up to support Yingluck at the court. However, authorities were not concerned about the supporters, but of a “third party” that might provoke chaos, the source said.

Officers would also consider the sources of funding for supporters’ trips to Bangkok, the source said, adding that the total cost of all the passengers in a single van visiting the capital would amount to Bt100,000.

Other modes of transport that might be used by Yingluck supporters include free train services provided by the government. People travelling by train would probably arrive a couple of days before the verdict and meet at assembly points in Don Muang and Lak Si districts near the Supreme Court, the source added.

Chalermchai said in the meeting that everyone should do their duty in ensuring peace and order, as well as to create an understanding with people regarding the issue, the source said.

Initially, government forces would stick with security measures referred to as “Korakot 52”, which was considered a “soft” security plan, to cope with the situation, the source said, adding that another meeting would be called next week to reassess the situation.

Meanwhile, a red-shirt leader in Chiang Mai, who asked not to be named, told The Nation that the movement was being closely monitored by security personnel, who had asked if supporters planned to be in Bangkok for the verdict.

Red-shirt leaders had told security personnel they would stay home but give Yingluck moral support, the source said, adding that leaders had not been in touch with one another or discussed politics recently.

Anyone travelling to Bangkok for the verdict would do so privately, the red-shirt source said.

Prime Minister Prayut Chan-o-cha said yesterday he did not have a problem with people travelling independently and in good faith to support the former prime minister, but added that any third party that was involved would have to be scrutinised.

The premier last week issued a warning that he would have officers ask Yingluck’s supporters individually where they |were from and how they had travelled to |the court on the day of the verdict. Citing the necessity of law enforcement, Prayut warned that everyone had to obey all laws, including traffic laws that might be broken in the event of a road blockade.

“Everyone will be punished [if they break the law]. I will not let anyone violate the law,” Prayut said.

However, despite saying that authorities would not block attempts by Yingluck’s supporters to show up at the court, Prawit said it would be better if they stayed at home.

“They can come [from the provinces]. But if too many people come, I’m afraid there will not be enough space for them,” he said.

In a related development, Interior Minister Anupong Paochinda said there had not been any irregularities found in the spending of local administration organisations in connection with possible trips to support Yingluck.

However, organisations across the country had been instructed that spending had to be in line with laws and regulations, the interior minister said.

The Office of the Auditor-General |had floated the idea that local administrative organisations could have misused |state budgets to fund trips in support of Yingluck.

Some changes for traffic flow at Phuket International Airport