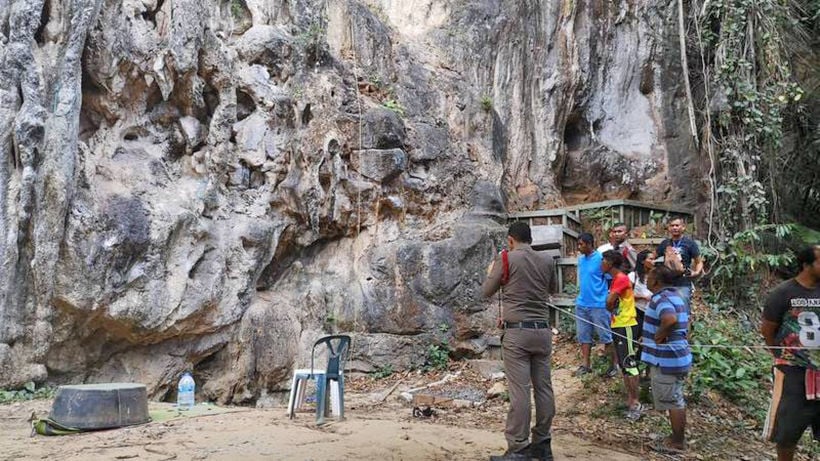 A woman is dead after falling some 30 metres to the ground while rock climbing in Ao Nang, Krabi, across Phang Nga bay from Phuket. Krabi police were called to the scene at the base of the 50-metre Khao Toh Luang cliff face, just north of Ao Nang, at 10am yesterday.

Once there, they found the body of 55 year old Nantawan Freja, of Kanchanaburi province in western Thailand. A climbing rope was still tied around her waist, connected to a climbing pin some 30 metres up the cliff face.

Bags containing clothes, rock-climbing ropes cash in different currencies were found nearby, as well as and Freja’s Swedish driving license.

Freja’s body was found by locals, who called the police. Officers believe she had been dead at least 12 hours before her body was found. The body was taken to Krabi Provincial Hospital for examination.

Police explained that Freja, originally from Kanchanaburi, was married to a Swedish man. The couple had a son and lived in Sweden, but also had a three storey townhouse in Ao Nang.

“Ms Nantawan’s husband and son came to the police station to acknowledge her death at 3pm [yesterday]. They did not believe there were any suspicious circumstances involved in her death.”

“At this stage, we believe that Ms Nantawan fell from the cliff face, but we have not concluded yet whether it was an accident. We are still questioning witnesses and waiting for the post-mortem report from the hospital.”