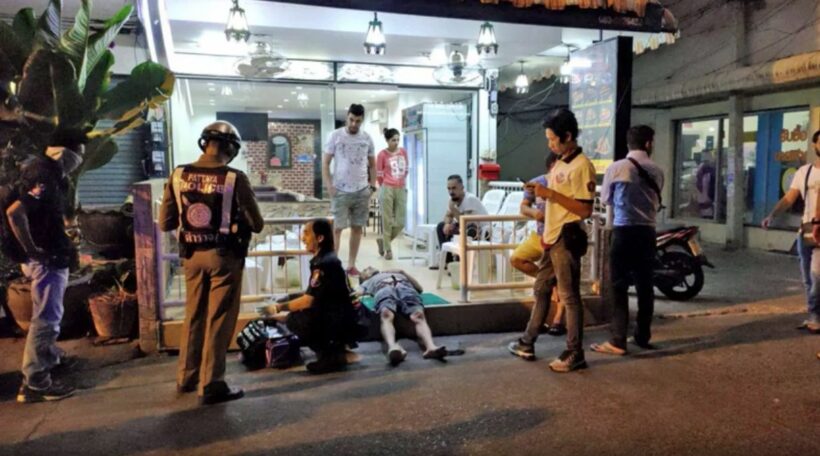 A 60 year old man is in custody after he was found collecting 44 kilograms of dried marijuana, valued at about 400,000 baht, from a parcel delivery company in Phuket.

Police told a press conference yesterday that officers were tipped off about a large shipment of marijuana arriving in Phuket via a parcel company at the end of February.

On the Saturday they went to the office of the private delivery company where they spotted one man who was acting suspiciously, and demanded to examine a carton he was carrying. Inside it there were 44 1 kilogram bricks of dried marijuana.

The man has been charged with possession of a Category 5 drug with intent to sell.

Police in Ayuttaya, north of Bangkok, yesterday arrested a man carrying an unregistered handgun and ammunition, who told them he was on his way to shoot his wife and her lover.

The 45 year old was pulled over on his motorbike for a search near Naresuan bridge yesterday morning. He was on his way to the local mall. Police say he was in possession of an unregistered gun loaded with a single bullet. Seven more bullets were found under the motorcycle’s seat.

A Saudi Arabian man, who was beaten by assailants in Pattaya claiming to be police, has now fled the hospital where he was being treated for his injuries. (

2 speedboats destroyed by fire in Phuket

There’s been another speed boat incident in Phuket, south Thailand. This time 2 speed boats have been badly damaged after one of them caught fire while tied up at a pier in Thalang yesterday afternoon. The fire spread to a second boat tied up next to it. No injuries were reported.

Phuket’s marine police reported that the Lee Loo 2 caught fire about 4.30pm at the Yamu boat pier in Pak Khlok.

The owner of Lee Loo 2 told marine police that he moored his boat at the pier after to allow tourists to alight after a day trip. He says that the fire started while the speed boat was being refuelled.

The damage to the two uninsured fibreglass boats has been estimated at 1 million baht.

Staff at a bar  in Pattaya have confirmed that they just had a normal seasonal flu and not coronavirus (Covid-19) as had been reported in numerous rumours on social media over the past few days.

Hospital results indicated that a staff member from the Pattaya Soi 6 bar did not have the Covid-19 coronavirus. They have now recovered their bout of the flu. Chulalongkorn Hospital officials confirmed the person was negative for the novel Coronavirus.