To the people sitting in the audience it looked like Jack Ma had pulled off a piece of modern day wizardry, selling 80,000 Thai durians in 60 seconds. Gone in 60 seconds indeed!

His much publicised visit to Thailand and meetings with the Thai PM and other ministers, signing of MOUs and various media appearances have drawn awe as well as a large chunk of cynicism over his motives to invest 11 billion baht through his e-commerce giant Alibaba.

Remember Alibaba, the character in the story, discovered the secret password to the cave of the forty thieves. The e-commerce giant Alibaba, and his T Mall, is slowly opening the doors of nations, one by one, by offering them golden coins in exchange for access to their trade markets.

(What was the ‘password’ to open the cave in the story Alibaba and the forty thieves? Read on…)

Critics say it remains unclear whether Thai durian growers and other farmers will gain from Alibaba’s bigger presence in Thailand.

Chotichai Bua-dit, president of the Rayong fruit orchard operators’ club, said it was good news that Thai durian growers had received many advance orders due to the advent of Alibiba, which already owns Lazada, the No 1 e-commerce site in Thailand. However, he is not sure whether durian and other farm prices will be depressed by these giant online platforms in the future due to their monopolistic power. 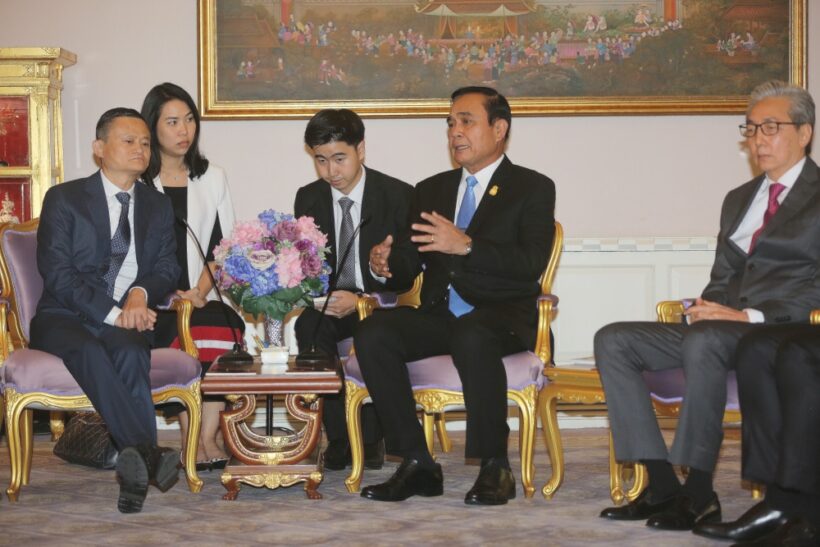 Suwit Saeng-arkard, the leader of another Rayong durian growers’ group, said Thai durian growers should benefit from Alibaba’s bigger presence as they will have more opportunities to sell their output, especially via online platforms.

Pramote Ruamsuk, adviser of the Eastern Provinces’ Chamber of Commerce, said he is not sure whether Thai farmers would gain more from Alibaba since there have been many Chinese businessmen setting up operations in Thailand to buy durians directly from farmers for online sales.

Somchai Ngamvannagul, a durian grower, said the wholesale price of Monthong durians had risen to 100 baht per kilogram from 70 baht earlier this month, but the supply is expected to be less than last year’s, so prices will probably be strong. On Alibaba’s presence in Thailand, he said any benefits in the short term should be minimal for Thai durian growers due to this year’s expected lower supply.

Dr Nipon Poapongsakorn, a distinguished fellow at Thailand Development Research Institute (TDRI) and expert on the agriculture sector, said e-commerce platforms in general were good for Thai farmers since there are no middlemen to take profits. Regarding Alibaba’s bigger presence in Thailand, he said that Alibaba’s Tmall online marketplace has a solid reputation in protecting the interests of buyers, since it will not pay the sellers if their products are not satisfactory. However, he said Thailand is not well-prepared to take advantage of online platforms and other features of the digital economy due to the shortage of qualified personnel and lack of inter-ministerial policy coordination. For example, there is a shortage of people with skills in big data, analytics, artificial intelligence and other areas crucial to develop the digital economy.

Jack Ma came to Bangkok last week and with 11 billion baht of gold coins has uttered the magic word ‘Open Sesame’ to open the cave door to countless more billions that will flow through his e-commerce Alibaba’s bank accounts in China. There’s no doubt segments of the Thai agricultural business will also benefit but let’s not be under any allusion that Jack Ma is a businessman first and a philanthropist second.