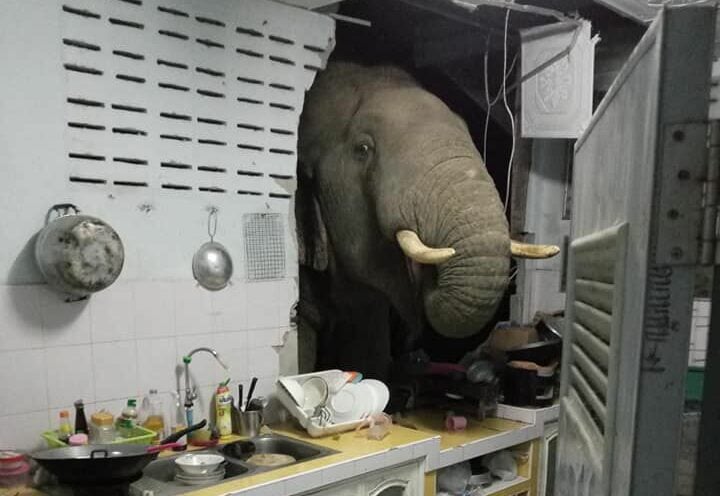 A wild elephant busted into a home in Prachuap Khiri Khan’s Hua Hin district yesterday, breaking through the wall and poking its head into the home’s kitchen. The elephant’s trunk reached into a shelf, knocking over kitchen supplies and grabbing what appeared to be a bag, then stuffing it into its mouth.

The homeowner posted photos and a video on Facebook with the caption “comes every day,” written in Thai. She didn’t write anything more about the elephant invasion. The Department of National Parks, Wildlife and Plant Conservation told Nation Thailand in a statement that “government agencies will repair the victim’s house as soon as possible.” Local officials in the provinces are discussing compensation for the damage.

Last year in Chon Buri, wild elephants chased a motorbike driver who fled to a nearby family’s home. The 3 elephants ran after him and damaged the front of the home. In the same area a month prior, an elephant wandered to a resident’s home. The home was made out of zinc panels and the father kicked out a section when he heard the elephant approaching and fled the area with his wife and daughter.