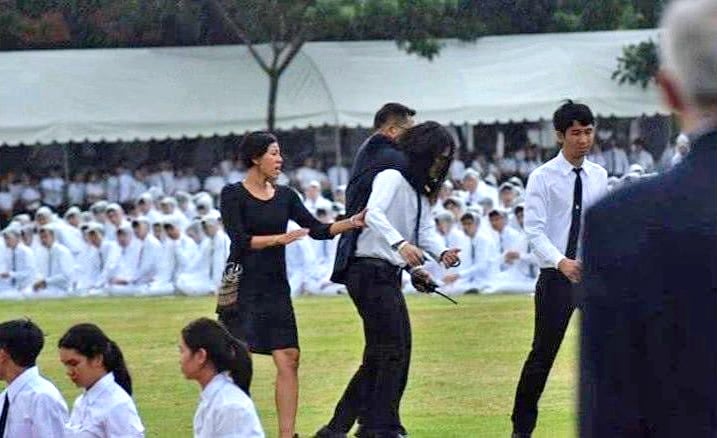 EDITORIAL
The recent silent protest at the country’s most prestigious university in Bangkok, THAT photo of a student in a chokehold from a lecturer and the subsequent publicity, has wider implications than just a sore neck and a university in PR panic.
There’s been a lot of media blow-back on the venerated Chulalongkorn University after it was revealed a first year student at the campus was put in a chokehold for choosing to walk out of the ritual prostrating in front of a statue of Rama 5, King Chulalongkorn. The fact that it started raining during the ‘ceremony’ didn’t help.
Bancha Chalapirom, the Vice Rector for student affairs, claims no one was forced to prostrate themselves in front of the statue as part of an oath taking ceremony. The photos and witness accounts tell a different story and also show the man-handling and chokehold of a student by one of the lecturers who took umbrage at a group choosing to walk out of the ceremony.
Netiwit Chotiphatphaisal, President of the Chulalongkorn University, student council, says he “couldn’t stand the treatment of the students anymore” in what he considered an initiation ceremony. The Vice Rector has fired back saying “the students themselves chose to prostrate to show their respect of King Chulalongkorn’s statue and none of them protested, except Netiwit and his associates”.
The lecturer/amateur wrestler has been admitted to hospital over ‘stress’ from the media coverage of the incident and an internal investigation will take place.
Universities have long been the hot bed of dissenting voices and so it should be. Young people forming their views, speaking out against perceived wrongs and flexing their intellectual muscle. So it’s nothing new for students to have a voice contrary to the establishment. Add to this Chulalongkorn University’s conservative world view and it’s ripe for an incident like this.
Ironically, with the students being asked/forced/invited to prostrate themselves in front of a statue of King Chulalongkorn, the fifth King of the Chakri Dynasty, the young King abolished the practice back in 1873.
“The practice of prostration in Siam is severely oppressive. The subordinates have been forced to prostrate in order to elevate the dignity of the phu yai. I do not see how the practice of prostration will render any benefit to Siam. The subordinates find the performance of prostration a harsh physical practice. They have to go down on their knees for a long time until their business with the phu yai ends. They will then be allowed to stand up and retreat. This kind of practice is the source of oppression. Therefore, I want to abolish it.”
Royal Siamese Government Gazette 1873 (Translation)
That the students did walk out on the ceremony should be seen as a healthy sign that, amongst a current climate of smothering dissent and cooling political in-fighting, people are still willing and able to make a point. General Prayut and the NCPO can be largely congratulated on keeping simmering tensions between Bangkok’s elite and the ‘Red Shirts’ under reasonable control. Despite crackdowns there’s also been a measure of ‘reaching out’ to the wider Thai voters to start aiming all their passion in the one direction. The real test will come sometime in 2018 when, according to the General, a general election will be announced.
There has been much reported about the crackdowns on the media, social media, political dissenters and a few wayward politicians in exile. Bottomline – not a lot has really happened, so far.
Just read any of the popular Thai media, on any day, and you will see the spirit of dissent and intellectual protest is still alive and well in the Land of Smiles, albeit with a bit more attention on not crossing the grey line.
(The views expressed by the writer do not necessarily reflect those of Phuket Gazette or The Thaiger)
SOURCES: Khaosod English, Wikipedia, Nation Multimedia
PHOTOS: Khaosod English