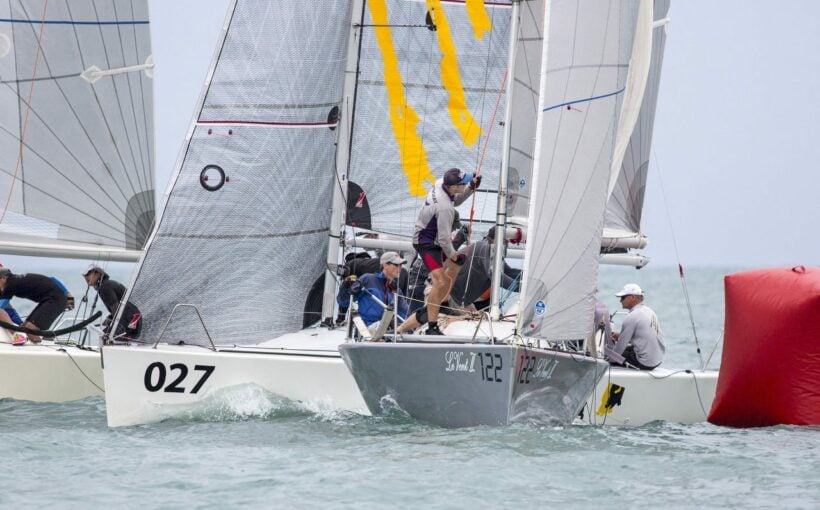 What a difference a day makes. Yesterday’s grey skies and consistent rain was replaced with hope this morning as blue skies hinted of a better day to come. A full fleet of boats headed out to their respective start lines as 120+ Optimists and more than 70 in the Single-Handed Monohull Dinghy and Double-Handed Monohull Dinghy classes started their series while the keelboat and multihull classes entered their second day and the IOM RC Yachts and Kiteboard classes finished their two-day series.

On the keelboat and multihull course a 90 degree wind shift put pay to the first race as the Race Officer was forced to abandon the race. After a storm, followed by lake-like conditions, the series got back on track and the classes were set off on a long round-the-islands course with winds topping out at 18 knots, while the Platus were set two windward/leewards.

Thai youngster and former World Optimist Champion (2010), Noppakao Poonpat, is helming the Thai TP52, THA72, and showed her smarts today extending the team’s lead in IRC 1 with a comfortable win on corrected time, opening up a two point gap in the series over Li Hongquan’s all-Chinese crew on Ark 323.

Another bullet for David Dimmock’s Loco in IRC 2 sees them extend their lead, however, a second for Gary Baguley’s team on El Coyote keeps them in the running, while David Bell’s Magic slips down the leaderboard following a fifth place in today’s race. A third place for Fujin today sees them move up the standings and are now tied in third at the half way point of their series.

It was a long day on-the-water for the cruising boats and all change on the results sheet. Tim McMahon’s SailQuest Hi Jinks were third across the line but with handicaps applied took the win. Yesterday’s winner and early series leader, Le Vent, had to settle for third today while George Foose’s Dream slipped into second.

Tables were also turned in the Ocean Multihull class as the pocket rocket Edenko zipped around the islands in a little under two hours to secure a handicap win and line honours double, while defending champion Sonic placed second.

In the Platu class, two windward/leewards today saw the class complete three races at the halfway point of their series. In the first race it was the defending champion, Team Viewpoint, that showed their pedigree finishing 16 seconds ahead of yesterday’s leader, Pine-Pacific. Sistership, Pim, skippered by Totsapon Mahanich, placed third.

As the wind dropped out in the second race today, Race Officer Simon James had to shorten course, and it was Chris Way and his crew on Easy Tiger III that capitalised putting their first win on the scoreboard. Team Viewpoint and Pine-Pacific dropped down to fifth and sixth respectively while Doolalli, skippered by Colin Simonds, placed second (just two seconds behind Easy Tiger III) ahead of Joel Tay’s Le Vent in third. Only 12 seconds separated the top three finishers.

The Kiteboard classes finished their series today and despite having to cancel the first day of racing, today they enjoyed some fast rides off Ocean Marina Yacht Club’s North shore.

Thailand dominated the Formula Kite Men with Rachan Taktin in first, Chanon Phrakaew placing second and Teerawat Sudoumkaew third. In the Men TT:R Slalom division, five-time Asian champion, Narapichit Pudla (THA) was undefeated and took a comfortable series win ahead of Thai compatriot Sarun Rupchom while a string of third place finishes for Belgian Sylvian Seynaeve gave him third overall. In the Men Thai B TT:R Slalom (open to Thai nationals only) Pichit Poolsaguan ran away with the title. Siri Parksiri claimed second and Chairat Dangdeemark rounded out the podium, while in the Women TT:R Slalom division it was Nichanan Rudtheng (THA) who secured the win by a single point from Ploipaphat Kosila (THA) in second and Siriporn Bootsarakomvisithi and Pannipa Kaewto tied in third.

Racing continues tomorrow for the keelboats, multihulls, dinghy and Optimist classes off Pattaya.

A man killed by a boar in Kathu