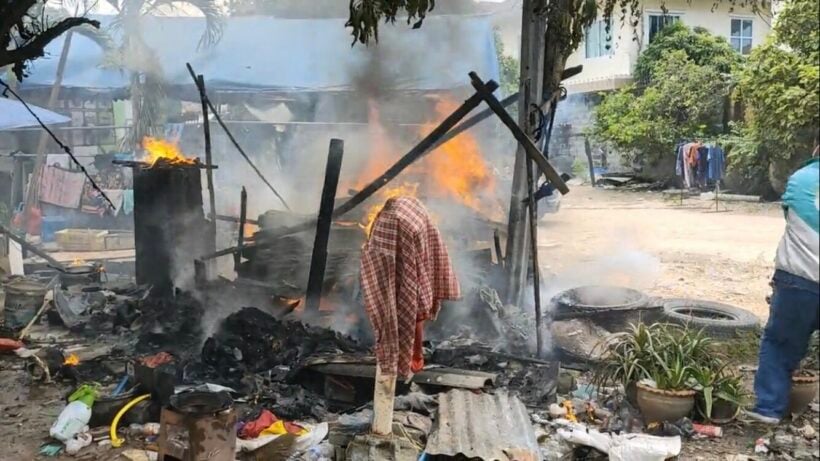 PHOTO: A careless cigarette burns down a home and homeowner was beaten by angry neighbors. (via Pattaya News)

Even more expensive than the new cigarette tax, a burning cigarette left unattended caused a man’s home in Si Racha to burn down and his relatives and neighbours to physically attack him after learning he caused the fire. The cigarette was reported to have been left burning which resulted in a fire that quickly spread and destroyed the entire home.

The fire took place on Monday afternoon around 1 pm in Surasak and firefighters from the Chao Phraya Surasak fire station were dispatched immediately. They arrived to a small wooden residential home that was engulfed in flames and rapidly burning. Firefighters jump to work quickly to contain the fire in about 10 minutes, preventing it from spreading to 7 other at-risk houses nearby.

Although the firefighters were able to control and put out the blaze, the home, which was very small  – constructed almost entirely out of wood – was completely destroyed. The 38 year old man who owns the home did manage to get out in time, telling reporters that he had stepped outside and neglected a burning cigarette that he left inside the house.

The homeowner escaped the fire while avoiding any injury. That is until his angry neighbours stepped in.

His relatives and the neighbours were very upset with him for being so careless with his cigarette and allowing the home to burn, and they feared but the fire was going to jump to their houses nearby. They kicked off with verbal arguments but the shouting soon escalated to physical attacks. The firefighters still on the scene had to step in in order to separate the neighbours from the man.

During the physical altercation where the homeowner did suffer some minor injuries, some neighbours claimed that the man set the fire on purpose but when police questioned them they admitted they had no proof of any such sinister plot.

When all is said and done, there were no immediate files charged against the man for his careless burning down of the house, nor for the neighbours who physically assaulted him. The police said they will investigate the fire further to see if there’s any validity to the claims of arson.