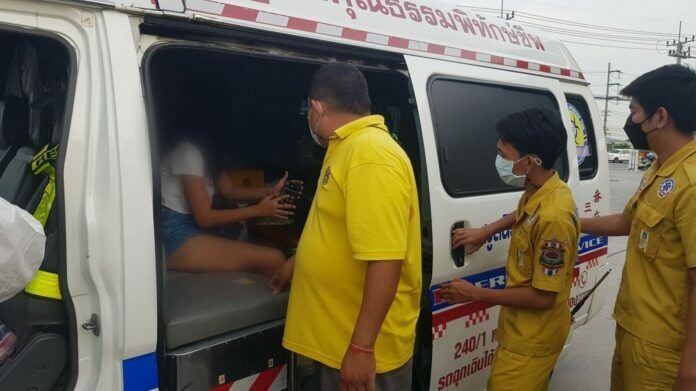 Chon Buri residents believe a woman is “possessed” after she jumped out of her car near a gas station in Mueang district, and started acted strangely. The 31 year old woman reportedly started acting with a number of bizarre behaviours, according to police from Chon Buri Police Station. These behaviours included rubbing her body with a Chinese talisman, and chanting to a passerby to summon a monk for her. Other behaviours reportedly included shanking and inattentiveness.

The manager of the gas station said locals in the area have superstitions about the nearby cemetery, and were alarmed by the woman’s behaviour, thinking she had been possessed by ghosts. The manager called the woman’s mother to tell her about her daughter’s behaviour, and was told the woman just broke up with her boyfriend and had a mental breakdown and anxiety problems.

The woman’s mother, as well as police, dismissed claims the woman was possessed by ghosts.

Police took the woman to Chon Buri Police Station to wait for relatives to pick her up. The Pattaya News reports that it was unclear if she would be taken for a mental health or medical evaluation. Police said that they found a battery, an amulet string, and another Chinese talisman in the woman’s truck.

Some Thais believe that strange behaviour is due to people being possessed by ghosts or spirits. At a Phuket festival in 2017, some people thought a foreign woman was possessed by Chinese angels when she closed her eyes and started shaking her head. In 2016, locals in Phuket thought a Belorussian man must have been possessed when he had hallucinations and said he could see dead people.

PapayaBokBok
my new go to excuse for police----ive got the devil in me! Quote
HiuMak
Superstition is rather prevalent in Thailand