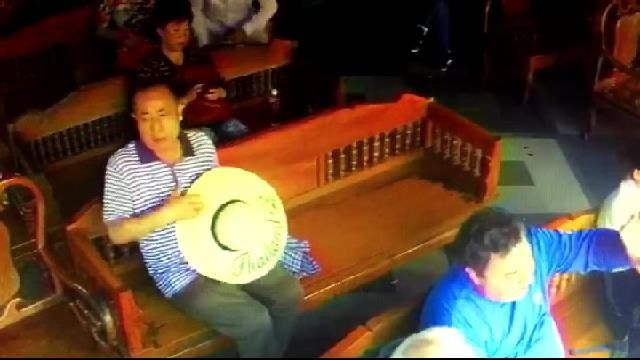 A Chinese man has been caught stealing a camera from a Spanish couple in Chiang Mai.

The incident happened on Tuesday and was captured on CCTV. The Spanish tourists had been visiting Wat Phra That Doi Suthep when they put a GoPro camera on the bench they had been sitting on. After realising they’d left the camera there, they returned but the camera was gone.

They reported the missing GoPro to police who checked the CCTV footage which shows the camera was picked up by a man wearing a large hat.

The man had been sitting behind the Spanish couple and picked up the camera after he saw it had been left on the bench. He goes to sit where the camera had been left before using his large hat and shirt to disguise the fact he was allegedly stealing the camera.

The man was part of a Chinese tour group who police later tracked down to the Old Chiang Mai Cultural Centre. When approached by police the Chinese man handed over the camera telling officers that he had intended to hand it in but wasn’t sure how or where to report the matter.

Channel 7 reports that the incident seemed to have been put down to a ‘misunderstanding’, with the camera eventually being returned to the Spanish couple. According to Thai media the Chinese man has not been charged with theft.

Meanwhile, a British tourist, who used the same excuse after picking up a mobile phone left on the ground outside Chiang Mai Airport in February, was charged with theft and ended up in jail for ten days. Story HERE.