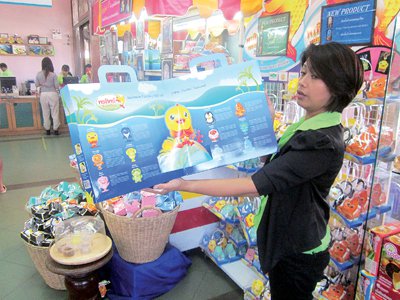 PHUKET: Pornthip (Phuket) Co Ltd, the island’s most recognized food-gift brand, submitted two of its award-winning products to contest in the AsiaStar Awards 2011, also known as the “Packaging Oscars of Asia”.

Having recently achieved national recognition at the ThaiStar Packaging Awards 2011, Pornthip’s Andaman and Sino-Portuguese gift sets will now join the regional ranks along with 54 other submissions in the Consumer Package category.

Winning will not be a piece of cake, as submissions include only national level design award recipients from all over the Asia-Pacific region – the cream of the crop in Asia production.

Launched for Phuket’s tourism markets in November 2010, Miss Nuthaya described the Sino-Portuguese and Andaman gift sets as collectible, cardboard, food gift boxes that contain a variety of local snacks and sweets or kanom.

The Sino-Portuguese set features a collection of model replicas of some of Phuket Town’s most famous historical buildings including the Phuket Thai Hua Museum, the City Clock Tower, Ang Mo Laow house, the Phuket Mine Museum and other antique architectural heritages around Dibuk Road, Thalang Road and Soi Romanee.

“The idea was to create a package worth keeping and at the same time remind and inform tourists about Phuket’s heritage. We chose cardboard so as to not add to the plastic trash problem. Even if the packages are thrown out, they can degrade easily, ” she explained.

Appealing to animal lovers is the Andaman Gift Set: a collection of 12 sea creature character-box packages for dried seafood, fruits, cashew nuts and other local preserved and processed snack items.

While the Sino-Portuguese packages serve mainly as collectible items, Miss Nuthaya explained that the Andaman (character) packages were designed with ‘reuse’ in mind, noting that the boxes can be used by children as coin banks or for keeping pencils and markers.

Though the idea and concept of the packages were the brainchildren of Pornthip Chairman Wirawat Piamwiwattiku, Miss Nuthaya confirmed that the actual designs were produced by Kamonthip Utarwuthipong and Nuntachai Santadkarn of Design Sense Ltd Part, a Bangkok-based design and branding consultancy.

Miss Nuthaya pointed out that the products were designed exclusively for the souvenir and food gift market, and not for export due to many of the snacks having a shelf life of less than six months.

She noted that in addition to the ThaiStar award, the Sino-Portuguese package design has also won two other design awards this year.

In October, it was the recipient of the Good Design Award (G Mark) in Japan and was one of 13 recipients of the “Design Excellence Award” (DEmark) at this year’s Prime Minister’s Export Awards held in Bangkok in September, which also includes categories that are for products not being exported.

As for the upcoming AsiaStar 2011 awards, which also includes submissions in categories for packaging designs for transport (13 entries), ecology (7 entries) and by students (42 entries), Miss Nuthaya is hopeful that Pornthip will do well when the entries are judged on January 11, 2012, in Dhaka, Bangladesh.