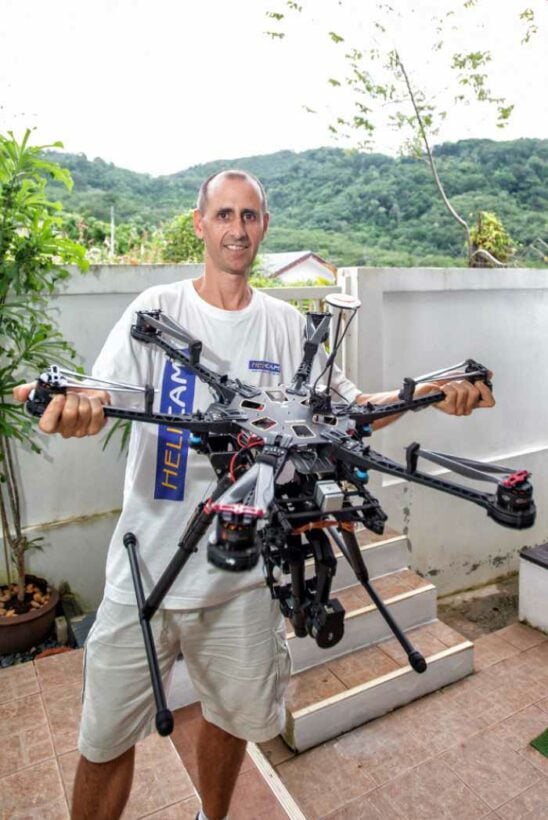 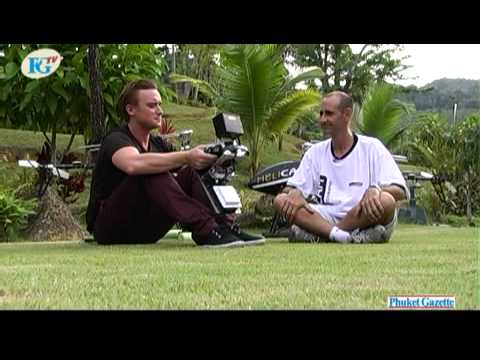 PHUKET: Perched on a steep hillside directly beneath the watchful gaze of the Big Buddha rests the compound that houses Helicam.

Owned and operated by British national Phil Clark, the media production company, which specializes in aerial photography and videography, is just about to celebrate a dozen years of operating in Phuket.

The anniversary will be highlighted by the upcoming launch of their new website which will display to the world, and especially potential clients, the extensive library of work they have accumulated over the years.

Coming off of a 10-year stint as an art director at an agency in the UK, Phil began to merge his interest in photography and hobby of remote control helicopters.

After an attempt at finding a foothold for his fledgling business met with resistance in Dubai, Phil’s Phuket-based brother suggested he explore his options on the island.

“I started off doing the job using helicopters to take aerial photographs of pieces of land. At the time, everyone was buying and selling land so it did sort of quickly kick-off,” recalls the energetic father of two.

“And then people were asking, can you also do the shots inside for me, can you do the rooms, can you do a video, so they were asking for more and I thought, ‘well, we are going to have to do more different things’. We diversified, got more equipment, we learned more about photography and became better photographers and videographers and now we’re doing hotel corporate videos for the Accor Group, Pullman, Banyan Tree, Angsana.”

Although it might sound simple – buy a cheap drone online for 30,000 baht and off you go – Phil and his team knew that to stay ahead of the pack, they had to offer services that branded them with a level of distinction.

“If we stuck with just doing the aerial photographs, we wouldn’t be here anymore,” explains Phil.

What gives Helicam an edge, and what makes them one of the most attractive options in their field, is the fact that they offer the full package – a one-stop shop for visual media.

“These guys can do virtual tours on the ground and these guys can fly helicopters and take shots of villas and there is a good production company that does videos, but I’ve never come across a company which does the whole thing and packages them together as one job [like Helicam does].”

Picture this: A property developer is marketing their new multi-villa project on a hillside overlooking the sea. Naturally, they want to pre-sell as many units as possible before breaking ground on the project. What Helicam can do is take a series of aerial images and process them into a interactive birds-eye view of the surrounding landscape. Next, they create CGI graphics of the new project. When a prospective client clicks on one of the units, a photo pops up which shows the view that they will see from their balcony. From the balcony, they can use the 360-degree virtual tour feature to actually navigate through the villa.

When the villas are complete, Helicam can combine their skyward approach of sweeping fly-throughs of the property with romantic edits of couples enjoying candle lit dinners, kids splashing in the pool and smiling faces of the staff to create a professionally published and visually stimulating package.

Helicam’s success has been a product of a proactive approach to identifying new technology and methodologies, and taking the initiative to develop the skills necessary to employ them and stay ahead of the game.

Although the business has enjoyed 12 years of growing success, it does come with growing pains. “One of the biggest challenges is actually – it’s not doing the work – but being able to be legitimate, having a Thai company operating in Thailand with so many language barriers and paperwork for work permits, business visas… red tape,” reflects Phil.

He explains the exhausting process of trying to keep up with the ever-growing list of requirements needed to operate his business. Even his Thai accountant has recently become very frustrated.

In addition to staying abreast of bureaucratic business requirements, Phil has to keep up with the breakneck pace of the quickly changing tech landscape.

“The helicopters changed [from petrol] to the electric ones, we got batteries instead of using fuel. And then it changed again and we got autopilots and instruments and they got more autonomous. Then the multi-rotors came out, then the hexicopters, the quadcopters, octocopters and it just keeps on going and changing.”

Phil has also kept on the cutting edge of his field by using the latest photography and videography equipment. He has forged forward from the days of slide film cameras through to the digital age and has even joined the ranks of the latest mirrorless revolution (story here).

Following a dozen years of building a robust reputation among a diverse group of notable clients such as Sansiri, Coca Cola and Proctor and Gamble, the sky’s the limit for this Phuket entrepreneur.

Job applicants should not be forced to do blood tests for HIV: Rights body