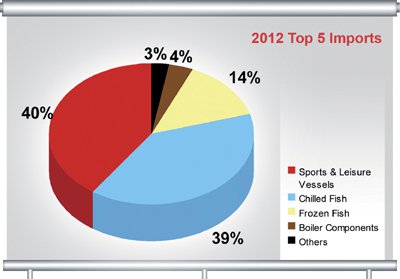 PHUKET: Two-thirds of the way into the government’s current fiscal year, international trade in Phuket is thriving, with the value of both imports and exports looking likely to surpass last year’s record-high performance.

Meanwhile, the value of imports is up to 1.59bn baht, compared to 2.12bn baht reported last year.

With four months still to go before the fiscal year is over, Phuket’s trade surplus of exports over imports has already cleared the 90% mark to matching last year’s figure of 10.39 billion baht.

Indeed, the total value of trade – the sum of exports and imports – is rapidly approaching the 13bn baht mark, close to last year’s full-year figure of 14.6bn baht.

Phuket’s top export this year, by far, has been block rubber, with exports of the commodity currently valued at 8.1bn baht.