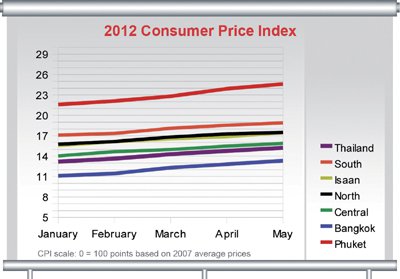 PHUKET: THOUGH the cost of living in Thailand continues to rise, the rate of increase over the past three months has slowed, Consumer Price Index (CPI) figures indicate.

Compiled and released by the Ministry of Commerce (MoC), the CPI national average nudged up 0.45 points to 115.23 in last month, a month-on-month increase of 0.39%.

Calculated by comparing current average prices of commodities and consumer goods to those reported in 2007 (base year prices = 100 points), monthly CPI increase rates in the first part of this year are as follows: 0.37% from January to February; 0.58% from February to March; and 0.42% from March to April.

When comparing the average CPI of all commodities in the first five months of the year with averages during the same period last year, the increase equates to 3.03%.

The category with the highest increase so far this year is electricity, fuel and water supply, jumping 8.31% when compared to averages in the first five months of 2011.

Using the same comparative criteria, the only categories to show decreases were public transportation services and communication and related equipment, falling by 0.55% and 0.16% respectively.

Engaged in negotiations with at least five governments, Thailand is looking to shave down some of its record-high stockpiles of unmilled rice.

According to recent estimates, the Kingdom is sitting on about 15 million metric tons of the raw commodity, a number which is expected to swell through June as farmers pay off their loans using rice under the government’s rice pledging scheme.

Countries set to purchase the rice include the Ivory Coast, Bangladesh, Indonesia, Philippines and the United Arab Emirates.