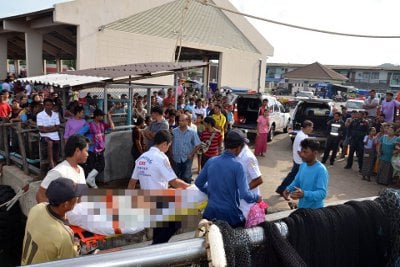 PHUKET: Two Burmese fishermen working on a local fishing boat were brought to Phuket’s Rassada Pier yesterday, after apparently being electrocuted at sea.

Once notified, police and Kusoldharm Rescue Foundation workers rushed to the scene to find grieving relatives surrounding the two bodies.

“Mr Kham, 25, and Mr Wan, 27, were pulling a fishing net from the sea, when Mr Kham touched the [stainless-steel] handrail. Suddenly, he was writhing on the floor,” explained the boat captain, whose name was not revealed by police.

Mr Wan tried to pull Kham’s body away from the handrail with his bare hands. Then, the electricity from Mr Kham’s body killed Mr Wan, he explained.

“By the time one of the workers shut off the power, it was too late – both men were gone,” the captain added.

Police believe that high-voltage electricity on the boat was grounded to the stainless-steel railing, and thus caused the deaths.

Police noted that there were no signs of violence. However, both bodies were sent to Vachira Phuket Hospital to confirm electrocution, or otherwise.