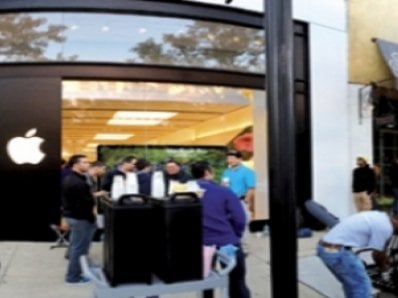 PHUKET: Last week I talked about the iPhone 5, how it compares to the Samsung Galaxy S III, and the problems that people from Toledo to Tashkent are going to have deciding which one to buy.

Here in Phuket, we have one HUGE question that doesn’t concern much of the rest of the world – and it’ll be a key factor in determining whether your purchase decision for an iPhone 5, should you feel so inclined, turns out to be prescient, or just another dud. Here’s the core of the problem.

When you buy an iPhone 5, you’ll expect it to support LTE – so-called “4G” – technology, if and/or when it ever appears in Thailand. One of the big selling points for the iPhone 5 (and the Galaxy S III) is its support of LTE.

LTE is worth the wait. In many parts of the world, LTE is almost as fast as a WiFi connection over fiber optic. That’s fast – astoundingly fast for a wireless connection. Last June, PC Magazine ran a side-by-side comparison of LTE and HSPA+ carriers in the US. With real-world workloads, the Verizon LTE network in the US averaged 8.5 Mbps downloads. AT&T averaged 17.6 Mbps. Compare that to the 1 to 2 Mbps international download speeds that are common in Phuket, perhaps 8 to 10 Mbps domestic – and that’s for a wired connection.

Of course, if we ever get LTE, the big speed bottleneck will come when the Internet Service Providers (ISPs) artificially hold back international access. They’ve done it before, they’re doing it now, and there’s no reason to believe that will change in the future. But at least the last mile will be fast.

Apple hasn’t yet announced the iPhone 5 release in Thailand, but they have announced it in many parts of the world, and there’s a dichotomy. Actually, a trichotomy. While most of the world thinks there is just one iPhone 5 (with different memory capacities and different colors), in fact there are three very different phones:

The Model A 1428 GSM runs LTE Bands (think “TV channels”) 4 and 7, which just happen to be the LTE channels used by AT&T in the United States.

The former, 850 MHz, is the frequency currently used by CAT, DTAC and TrueMove-H for their “3G” HSPA+ network.

The Model A 1428 CDMA runs CDMA, which, with the demise of the CAT EV-DO network, is no longer supported in Thailand.

The short answer is: I don’t have a clue.

I posed the question to Khun Papada,the Area Manager for Apple distributor Com7 International, and he doesn’t know, either.

If you get the A 1428, you’re betting that at least one of the “3G Auction” winners is able to muster the political and technical prowess to turn their 3G win into a 4G LTE network. I can hear the squeals at the trough already. If the 3G Auction winners are, in fact, restricted to putting up 3G networks, you’re dead in the water, because the phone doesn’t support LTE on either TOT’s 800 MHz or CAT’s 850 MHz networks.

If you get the A 1429, you’re betting that CAT will upgrade its existing 850 MHz system to an LTE network, or that one of the 3G Auction winners turns to LTE.

It isn’t an academic question. Enormous amounts of money are involved – hundreds of billions of baht, over the course of the next few years. The regulators may have already given the nod for LTE deployment on the 3G Auction acquired bands – I can’t find any information about it, one way or the other. It’s entirely possible, though, that the government is very strictly auctioning off 3G (presumably HSPA and HSPA+) access to the 2.1 GHz frequency. If that is the case, a phone company upgrading from 3G to 4G isn’t simply a matter of buying more expensive equipment for the towers, it’ll involve regulatory approval from somebody, somewhere.Thus, the squeal.

3G is a different story, of course. I haven’t seen the published specs, but I’d be willing to bet both iPhone 5 models will support all of Thailand’s 3G services.

So, there you have it. I wouldn’t be too surprised if Apple ponders this question for quite a while, before announcing which model(s) it will make available in Thailand.

If you’re looking at buying an iPhone 5 outside of Thailand, be intensely aware of the fact that – depending on Thai regulatory vagaries – the particular phone that you buy may or may not be capable of running 4G in Phuket in the future.

That is, assuming Phuket ever gets 4G.