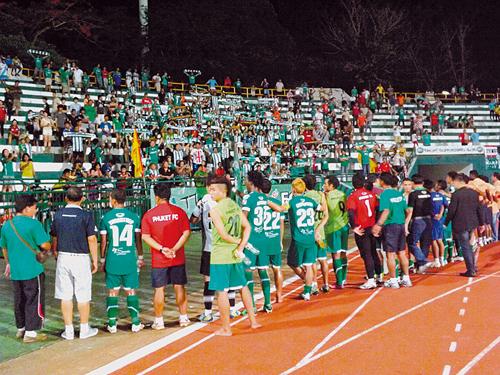 PHUKET: Sponsorship experts Paul Poole (South East Asia) Co Ltd will represent the island’s pro soccer team, Phuket FC, in the club’s drive to find new sponsors for the second half of the 2013 season and beyond.

The team is offering three tiers of sponsorship packages as follows: The first tier comprises a Main Shirt Sponsor, which will give the company or organization rights to the jerseys’ most prominent logo, as well as a Stadium Sponsor.

“Surakul Stadium is owned by the government, but in the future, if the club decides to change its home ground, the Stadium Sponsors will have the naming rights [for the new stadium],” explained Udomporn Phanjindawan of Paul Poole.

The second tier will include Club Co-sponsors, of which the team is looking to partner with up to four entities from non-competing categories, including the kit manufacturer, as well as up to four Stand Sponsors.

The third and final tier will comprise Official Partners and Media Partners – from different industries that can provide supplies and media support for the club.

Tailored to suit differing needs, the packages will enable businesses to integrate their own marketing initiatives with those of Phuket FC and will allow them to reach a global audience.

Paul Poole, an independent marketing consultancy based in Bangkok, with a Southern office in Phuket, specializes in commercial sponsorship and partnership marketing, working with both rights holders and brands.

The popularity of football makes it the ideal platform for companies in Asia to increase their brand awareness, he says.

Nicknamed the Islanders, Phuket FC is a Thai professional football club, competing in the Kingdom’s first division, Yamaha League One (YL1) – a tier down from the Thai Premier League (TPL). The club has set a goal to finish as one of the top three teams in the YL1 this season, and thus get promoted to the TPL (click here for sports news).

Formed in 2009, Phuket FC gained promotion to Thai Division 1 after finishing runners-up of Thai Division 2 in 2010. As a new club, Phuket FC’s fan base is growing quickly, attracting approximately 5,000 fans to every home game and 16,000 plus followers on the official club Facebook page.

Football has a long history in Thailand, having been introduced to the country in 1897.