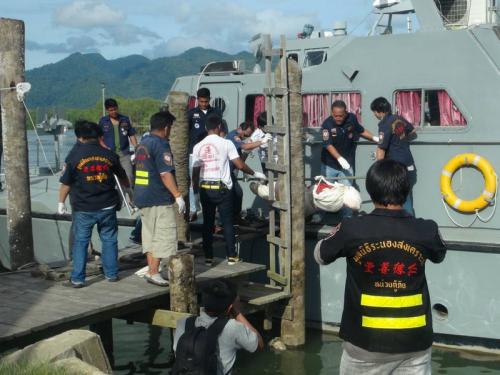 PHUKET: Marine Police recovered the bodies of nine Burmese nationals yesterday, bringing to 12 the number who died when their boat capsized in rough seas north of Phuket as they attempted to evade a Thai coastal patrol on Friday night.

Royal Thai Navy Commander Kampanart Sangthongjeen, chief operations officer of the Thai-Myanmar Border Fishery Coordination Center, explained in a press statement that Marine Police boats Tor 993 and Tor 221 were on patrol in the Koh Chang area when at about midnight they spotted a longtail boat.

“The boat tried to escape the approaching patrol vessels, but capsized in the strong wind and waves west of Koh Chang,” Cdr Kampanart said.

“Marine Police took about four hours to rescue 38 people – 32 men, five women and 1 child – from the water,” he added.

The bodies of three women from the capsized boat were also recovered in the rescue effort.

“After questioning the survivors and checking their identification documents, we found all of them were illegal immigrants coming to Thailand to work,” Cdr Kampanart said.

Survivors told police they all boarded the boat at Kawthaung, a major trading town across the water from Ranong Port.

All 38 survivors were transferred to Pak Nam Police Station in Ranong, where they were to be charged with illegally entering the country and deported, Cdr Kampanart said.

The bodies of the three women retrieved from the water during the rescue effort were sent to Ranong Hospital to await collection by relatives, he added.

“The Royal Thai Navy expresses our sincerest condolences for the people who lost their lives in this unfortunate accident,” he said.

Governor looks for direct flights between Phuket and Nice, France