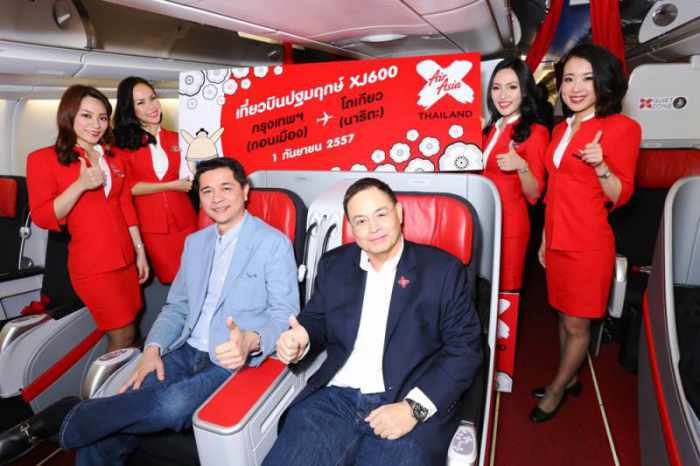 PHUKET: Thai AirAsia X is spreading its wings to Japan to tap both the leisure and business segments using Thailand as its gateway to the Southeast Asia region.

Despite the low season, the move into Japan has been well received with the load factor averaging more than 80 per cent. This has given the airline confidence that demand for low-fare travel between the two countries will continue to increase.

“We have already achieved 50-per-cent advance bookings for the first quarter of 2015 and have decided to increase flight frequencies to two per day for Tokyo and one daily to Osaka to serve visitors during the Songkran holiday. Frequency adjustment will be starting in late March,” he said.

The airline’s third aircraft will also arrive in March, so more seats could be sold next year.

Introductory fares have been set at 19,000 yen (5,800 baht) per sector, inclusive of airport tax and fee, from Tokyo or Osaka to Bangkok or to Chiang Mai, Chiang Rai, Phuket, Krabi and Hat Yai via Bangkok. The returning one-way promotional fare from Bangkok to Tokyo is priced at 5,990 baht and to Osaka at 3,999 baht.

Since business class is available on flights in and out of Japan, the airline is targeting both the younger generation and businessmen with business-class fares that are slightly higher than the economy class fares of full-service airlines.

To set up a gateway, Thai AirAsia X is providing a Fly-Thru transit option for passengers from major cities in Thailand as well as in other countries in the region like Myanmar, Vietnam, Cambodia, Indonesia, Malaysia and Singapore. Passengers now can benefit from flights to Japan with the Fly-Thru service at Don Mueang.

With its flight additions, Thai AirAsia X becomes the airline with the second biggest seat capacity between Bangkok and Narita with over 14 flights a week, or 10,556 seats per week.

Once flights to Kansai increase to seven per week, it will also have the second biggest capacity between Bangkok and Osaka at 5,278 seats per week.

“Thai AirAsia X is aiming to play a major role in stimulating travel from Japan to Thailand by offering connections throughout the Kingdom to its regional neighbors at equally low fares,” he said.

This year, Thai travellers to Japan could reportedly rise 30 per cent to 600,000 as the country’s variety of travel styles allows for repeat visits. There is also an equal number of free independent and group travellers from Thailand going to Japan.

While Japanese passenger numbers have dropped since the beginning of the year, an uptick is expected in the latter half and the airline is confident that this year will match last year’s total of 1.5 million.

Thai AirAsia X operates an Airbus A330-300 aircraft with 377 seats – 12 business class and 365 economy class. Those preferring to sleep can enjoy business class’ reclining premium flatbed seats, complimentary 40 kilograms of checked-in baggage, a complimentary meal and drinks, and many other privileges.