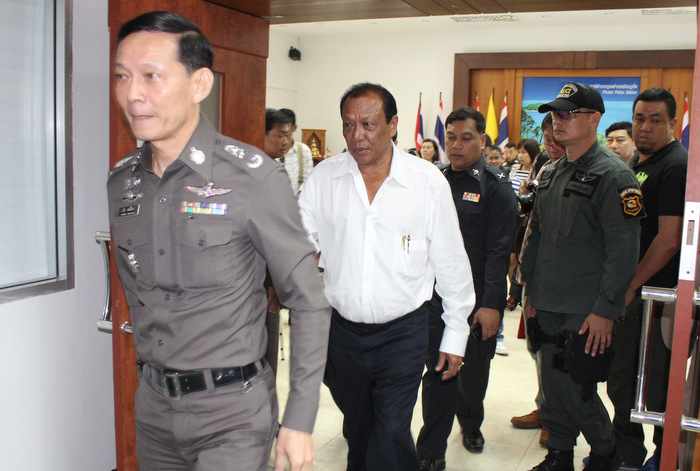 PHUKET: Former Patong Mayor Pian Keesin, his sons “Prab” and Pattawee, and five other members of the Keesin-owned Pisona Group have been released on bail.

Wanted on charges of extortion and criminal activities carried out by a criminal association (story here), Mr Pian and five other suspects from Pisona Group surrendered to officers at the Royal Thai Navy base at Phuket’s Cape Panwa yesterday morning.

They were handed over to Phuket City Police just after midday under military escort (story here).

Mr Prab was flown to Phuket under escort by Bangkok police yesterday afternoon.

He was finally successful early this morning.

“All eight suspects were released at about 3am after police had finished questioning them,” Phuket Provincial Police Commander Krajang Suwannarat told the Phuket Gazette this morning.

“Bail was initially denied because we had yet to finish questioning the suspects,” Maj Gen Krajang explained.

“But bail was finally granted as all eight suspects had surrendered themselves to police and they are not believed to be flight risks.”

Region 8 Police Deputy Commander Paween Pongsirin, who has spearheaded the purge of Phuket’s taxi mafia, disagreed with bail being granted.

“I personally did not want to see them released as they now have the opportunity to intimidate witnesses,” Maj Gen Paween told the Gazette.