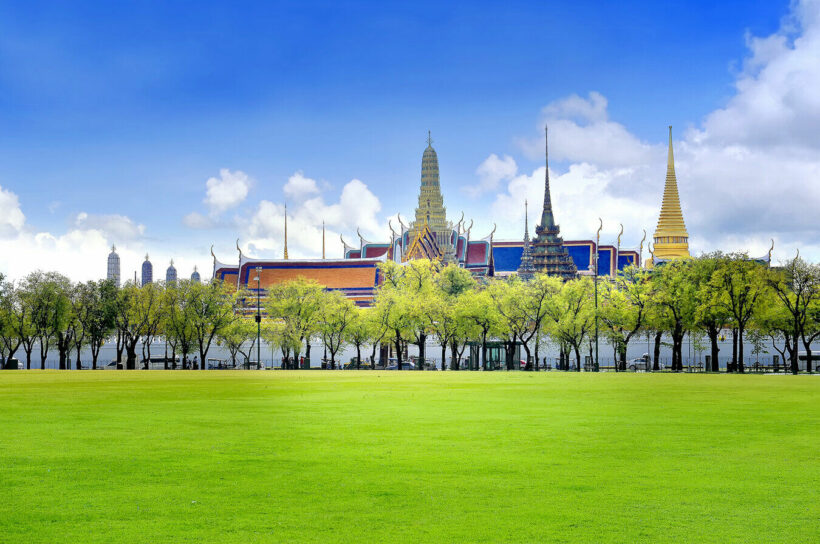 Thai officials are debating how much access the public should have to Sanam Luang, the historic public square in front of Bangkok’s Grand Palace and Temple of the Emerald Buddha. After a governor candidate running under the Move Forward Party advocated removing fences around Sanam Luang, another official has defended keeping them and restricting access to the ‘public’ park.

The park has a long history, with its auspicious location and role in the life of Thailand’s royal family and ceremonies, as well as a location for protests and the low point, the ‘Thammasat University Massacre’ in 1976 (more about that later).

The Move Forward candidate, Wiroj Lakkhanaadisorn, visited Sanam Luang on Thursday as part of a campaign to “reclaim Sanam Luang”. Wiroj says the square should become another green space accessible to locals. He added that there is already CCTV at Sanam Luang deterring people from committing crimes, and therefore fences aren’t necessary.

Wasant Boonmuenwai, director of Phra Nakhon district, hit back, arguing that Sanam Luang should keep the fences. Wasant said that while Sanam Luang is open for visitors most days, it’s also a historic site that serves as a venue on special occasions. These occasions include the Royal Ploughing Ceremony, and Father’s Day. He said since Sanam Luang is near the Grand Palace and Temple of the Emerald Buddha, City Hall has issued a specific set of regulations for its use and maintenance.

“Sanam Luang is open to the public from 5am until 10pm. Walking and running are the only activities allowed. Other activities are currently not permitted due to the Covid-19 pandemic”.

In addition to the public square, Sanam Luang also has a grass field. Many Thais enjoy flying kites during the country’s kite-flying season from February to April.

Sanam Luang and the adjacent Thammasat University were also the scene of the 1976 ‘Thammarat Massacre’ where government and police cracked down on ‘leftist’ protesters. Official reports record that 46 people were killed and 167 were wounded, while unofficial reports claim that more than 100 demonstrators were killed.