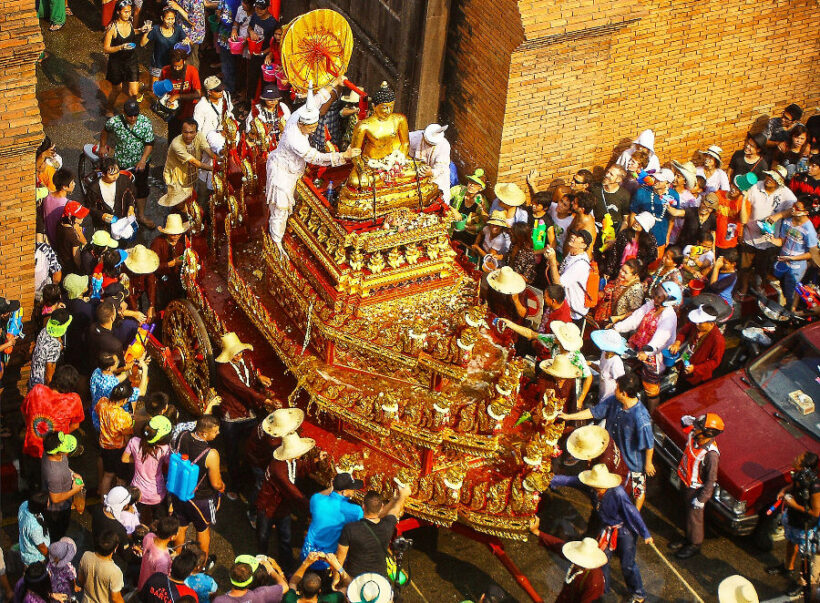 As Songkran approaches, health officials are warning that daily Covid caseloads could reach over 100,000 after festivals “if Thais don’t take precautions”. Even before Songkran, the Department of Health predicted daily cases could rise to 50,000. But now they’ve doubled their prediction.

PM Prayut is also urging Thais to “take precautions”, particularly before visiting elderly family members. A government spokesman said yesterday that family activities should be held in well-ventilated areas, and people should take antigen tests before the activities.

Read The Thaiger’s opinion piece about this prediction of 100,000 Covid infections HERE.

The Department of Health also advises elderly people, and people with underlying health problems, to get booster shots at least seven days ahead of Songkran. After Songkran, the Thai department of health is advising returnees from their home provinces to monitor themselves for up to 10 days. A DOH director added that if people develop any Covid-19 symptoms, they must take an antigen test and avoid meeting people.

A government spokesman said yesterday that the government is preparing for inter-provincial movement of people returning to their home provinces as daily infections continue to soar.

Next week, the Bangkok Metropolitan Administration is mulling whether to allow Songkran water splashing festivities to be held on Khao San Road, after the CCSA’s unpopular announcement banning water splashing activities for a third consecutive year sparked much backlash from local businesses last week.

Soidog
53 minutes ago, LoongFred said: Let's hope so! Most do nothing. Just display a random number between 36.1 and 36.8. A bit like the mine detectors they bought a few years back

palooka
On 3/26/2022 at 12:56 PM, BillO said: You mean like their tourist number predictions? Lol How about this. When it doesn’t happen you lift all these useless restrictions and stop destroying your own country! Thailands economy has already been destroyed.…
LoongFred
10 minutes ago, palooka said: Thailands economy has already been destroyed. 2 years back to back negative economy, on the big slide already and going for 3 years, bye bye baht. The tourist industry is in deep trouble and needs…

Soidog
7 minutes ago, LoongFred said: The tourist industry is in deep trouble and needs to refocus, into activities suitable for families. Hopefully the continuous lockdowns will eliminate many sleazy places and allow something better. What sleazy places? What would a…
Nivram
Let's remember, sleazy people make sleazy places. If no sleazy people, you wouldn't need places to cater to sleazy people.

Why you should spend your Songkran in Chiang Mai 2022