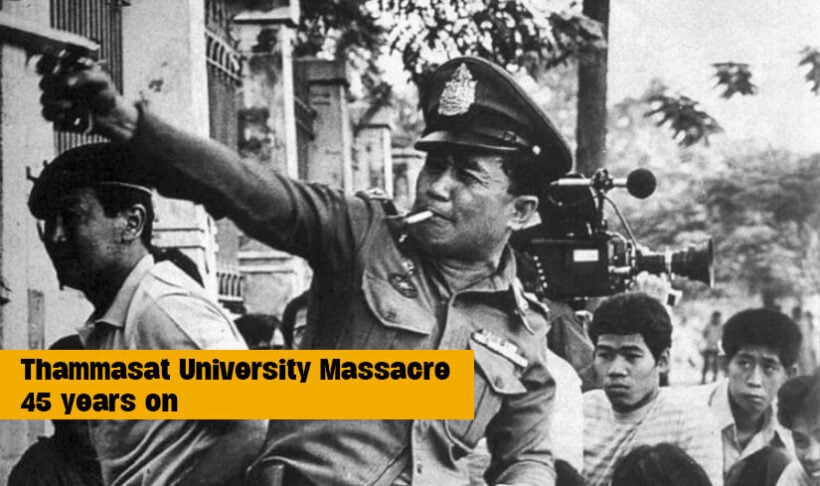 Yesterday marked the 45th anniversary of the infamous October 6 massacre at Thammasat University in Bangkok in 1976, when 4,000 police and military forces blocked all exits from the university before firing machine guns, assault rifles, grenade launchers, and other military-grade weapons on the students after increased anti-government protests.

Officially, some 45 people were killed and over 145 injured, but historians generally propose the number of casualties was much higher.

The actual events on October 6, 1976, 45 years ago, were preceded by an incident a few weeks before when the tortured corpses of 2 electricity workers were found hanging just north of Bangkok.

The Thammasat University Massacre incident should also be placed in the context of the mid-1970s SE Asian politics and the events swirling around the region. Next door the Americans had just lost the Vietnam War, Loas was over-run by a communist government, and the Khmer Rouge had taken advantage of the instability in Cambodia to impose ‘Year Zero’, a bloody and xenophobic communist dystopia.

In Thailand the politics of the time were already becoming more polarised. Right-wing, loyalist factions, backed by the army, were battling a left-leaning socialist rump, with the student movement leading the way. The events of 45 years ago still resonate with today’s student movement in Thailand openly critical of the Bangkok elite and Thai Army in the protests over the past 12 months.

The return of two highly divisive former tyrannic leaders of Thailand, who had been in exile for three years, at the same time, added more fuel for protests and political unrest.

The discovery of the 2 dead bodies sparked new protests, which culminated in the bloody crackdown by police, army and a right-wing militia at the Thammasat University campus and adjacent Sanam Luang on the morning of October 6, 1976.

The temporary museum uses a range of media to describe the lead up to the massacre, the carnage of that bloody morning, along with vivid images and sounds of the day’s fateful events.

Last year, for the 44th anniversary, Tim Newton visited Thammasat University where they had a pop-up museum and display about one of Thailand’s most pivotal political events.

Faraday
32 minutes ago, Rain said: Police Col. Salang Bunnag. Another piece of work of that era. Photo taken by Kraipit Phanvut of the BKK Post.   Strange looking 'man'...     https://www.bangkokpost.com/thailand/general/1418123/ex-deputy-police-chief-salang-dies-after-shopping-centre-plunge
Leo
Good for them to put up a museum about this. It shows Thailand is on a very different level compared to some other countries.

Rain
On 10/9/2021 at 7:34 PM, Leo said: Good for them to put up a museum about this. It shows Thailand is on a very different level compared to some other countries. Frankly, I was rather surprised when this temporary display…

Soidog
On 10/8/2021 at 11:43 PM, Faraday said: Strange looking 'man'... https://www.bangkokpost.com/thailand/general/1418123/ex-deputy-police-chief-salang-dies-after-shopping-centre-plunge He looks like the devil.
cowslip
Place with guns and on the anniversary an ex-police with a gun kills 30 students and teachers in the North.   No-one was ever brought to justice for the Thammasat massacre - some people present are still in authority today.