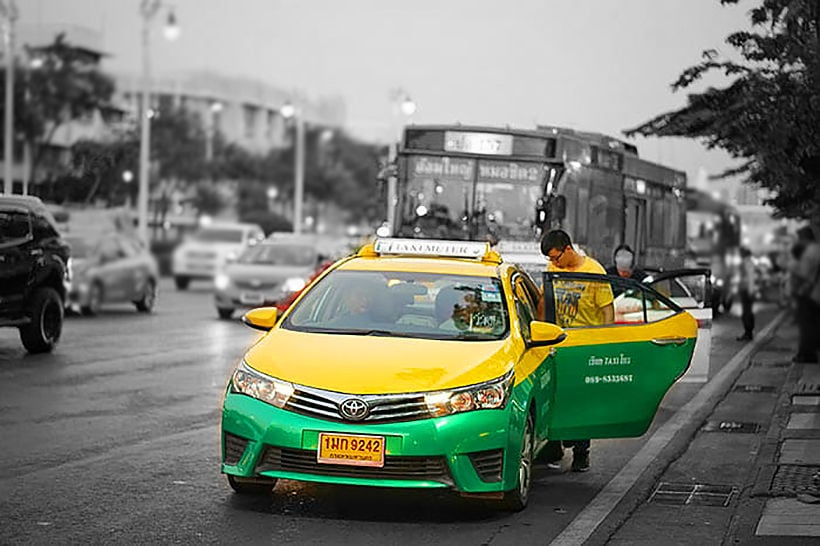 “35% agree with the fare hike, reasoning that it could reduce the problem of taxi drivers refusing customers.”

A Nida Poll reports that 81% of respondents are unhappy with the new taxi fares that will raise the immobile rate (sitting in the traffic) from 2 baht per minute to 3 baht per minute.

The poll reveals the results of a survey on “Transport Minister Gives Green Light for Taxi Fare Increase”. The survey was taken on August 8-9 from 1,505 residents of Bangkok and surrounding suburbs.

According to the poll, 62.5% of participants disagreed with the raising of the taxi fare from the second to the 10th kilometre from 6-6.5 baht per km, arguing that the old rate was already high, the prices of NGV/gasoline had not gone up substantially, and the service quality did not merit the hike.

Of the respondents, 35% say they agreed with the fare hike, reasoning that it could reduce the problem of taxi drivers refusing customers, while 2.5%t answered “do not know/are not sure”.

The great majority who disagreed with the immobile rate hike argued that driving in a traffic jam was inevitable and should be considered a part of the service. However, 18% of respondents backed the raise, citing the same reasons, while 1% were unsure.

The poll also explored public opinions on the hike in the airport taxi surcharge from 50 to 70 baht for small vehicles and 90 baht for larger vehicles. Some 76% disagreed with the raise, saying airport taxis had already monopolised the service and passengers were not allowed to call taxis from outside the airport.

Around 22% agreed with the raise, saying it was reasonable and affordable for most airport users.