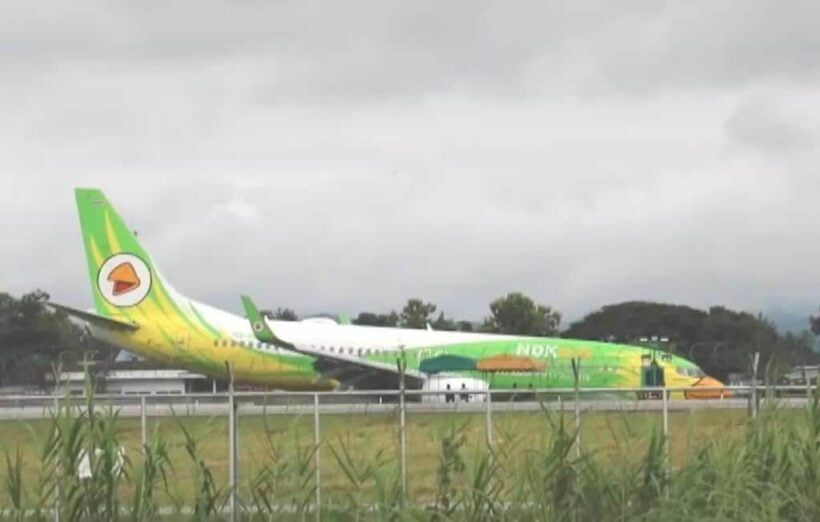 Nok Air has made a public statement apologising to passengers who sat on a Boeing 737-800 for over an hour after it skidded off Chiang Rai International Airport’s runway on Saturday evening. Several passengers have expressed dissatisfaction with the evacuation procedure. Nok Air said the safety of passengers was the airline’s “highest priority.”

The airline said the reason it took so long to get the 164 passengers out of the aircraft was because the airline “followed the highest safety procedures.” Heavy rain and waterlogged ground outside the aircraft made it harder to navigate the evacuation too, said Nok Air.

However, passengers have said it was not at all necessary to keep the passengers on the plane for so long. Passengers said the captain turned off the engines which in turn turned off all the lights and air conditioning in the cabin.

Mae Fah Luang International Airport has a single runway, meaning no other planes could attempt to land on the runway while the Nok Air aircraft obstructed the path. However, Nok Air said passengers were not able to stand on the runway to await for vehicles to pick them up because it went against their procedures.

After an hour without air conditioning, passengers began to complain they were struggling to breathe, which is when the cabin crew opened the doors and allow passengers to slide down from the emergency exits.

One passenger said that only two vehicles came to pick up passengers from the aircraft, and suspects that the lack of available vehicles at the airport could be a reason for the delay. However, Nok Air did not cite this as a reason in their statement.

The airport announced the suspension of all flights in and out of the airport on Sunday morning. Yesterday, the director of Mae Fah Luang Chiang Rai Airport said that removing the aircraft was a three-day job because the plane’s wheels were stuck in the mud and a crane would need to be used to lift the Boeing 737-800 out of the ground.

Flights in and out of Chiang Rai airport are expected to resume tomorrow, August 3, at 10pm. The disruption to travel has been significant, especially since the incident occurred during Thailand’s four-day weekend. Usually, 36 flights per day take off from Chiang Rai airport, facilitating a daily average of 4500 – 5000 passengers.

Morpheus
Should have evacuated ASOP after engine shut down, some emergency vehicles should have arrived within 10 minutes with lighting, however, TIT who knows what services were available in a small rural town. This will be a wake up call for…

DoUKnowWhoIAm
4 minutes ago, Morpheus said: After an hour without air conditioning, O boy! I sat on a A380 for 2 hours in Doha without aircon a couple of weeks ago. In fact, that's often the case on Qatar flights before…

Dancbmac
6 minutes ago, DoUKnowWhoIAm said: O boy! I sat on a A380 for 2 hours in Doha without aircon a couple of weeks ago. In fact, that's often the case on Qatar flights before takeoff, I try to board those…
Oracle
Sometimes it's better to keep one's mouth shut.  First, Nok Air blames rain for the runway overrun (but short of a plane malfunction, it's pilot error...there are procedures to follow and choices to be made when landing in heavy rain). …

Pinetree
1 hour ago, Morpheus said: Should have evacuated ASOP after engine shut down, Not always and not necessarily.  It depends on the state of the aircraft,  the ground safety outside the aircraft, lighting conditions etc. If the Captain assesses that…

Thailand to import smallpox vaccines from US this month