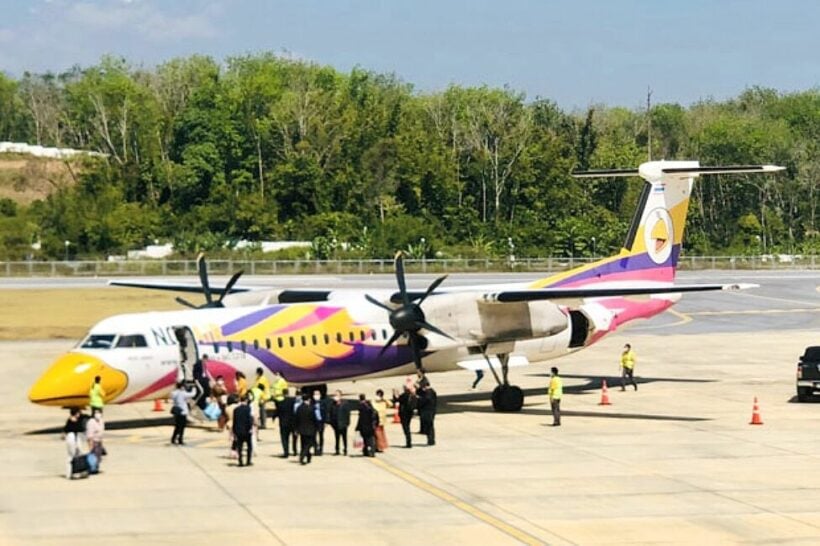 The long-anticipated Betong Airport is finally ready to launch in Thailand’s southernmost province of Yala, is expected to be up and running by next month. The first charter flight to Betong landed yesterday with 78 passengers hailing the beginning of the new gateway to the destination.

Businesspeople from the area were joined on the flight by an aide to PM Prayut Chan-o-cha, who lauded the event as the inaugural flight now that the Civil Aviation Authority of Thailand has given Betong Airport its certification and licence to operated and allow flights to arrive and depart. The flight landed at 11:17 am on Saturday, operated by Nok Air. The prime minister’s aide spoke of setting up a flight schedule for the new airport.

“Today’s landing is the first charter flight since the airport received clearance to welcome charter flights. Now the Transport Ministry is talking to some commercial airlines about conditions [to fly into the airport]. It is expected that Betong airport will fully open to serve the community and tourists in February.”

The charter flight eked in at the end of January after PM Prayut had promised that Betong Airport would see its first flights landing this month. He has been following the construction of the airport which began with a 1.9 billion baht budget in 2016. The airport’s original 2019 opening was delayed due to the Covid-19 pandemic.

Betong Airport is expected to open travel routes to the Deep South from all over the country. Betong has been particularly difficult to access due to its mountainous geography with only small, winding roads connecting it. The airport has been declared ready for operation by the new director of the airport who also oversees Narathiwat airport 3 and a half hours north, which was previously the southernmost airport in Thailand.

The airport is nestled into a divot where Thailand pushes into Malaysia, but flight paths have been carefully planned so that domestic flights can stay only in Thai airspace and not dip into Malaysian air that surrounds it on 3 sides. So far, commercial airlines have requested to operate 2 flight routes: between Hat Yai and Betong Airport, and between Don Mueang in Bangkok and Betong Airport.

quang
This is where the insurgent's put the the 11 bombs in Yala, and 1 outside of Yala
Cathat
If they can ever bring an end to the political problems in the area it does offer a lot for tourists however not look very promising at the moment.

4th vaccine for 25,000 Suvarnabhumi staffers by end of February