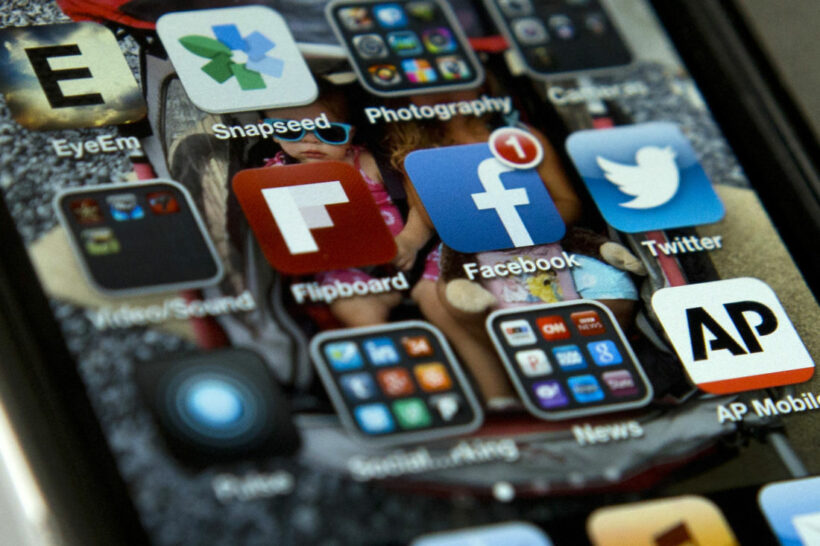 Phuket’s media is going through a minor revolution. A lot of work is going into spreading local news for an island of some 450,000 locals and 12 million annual tourists (who are unlikely to read any local news media anyway).

Roll back 20 years and the local leader in the media was the Phuket Gazette which lasted as an English-speaking newspaper for 23 years, in the days when there were plenty of English-speaking readers living on the island. It ceased publication in May 2017 (The Thaiger bought Phuket Gazette’s digital assets in July 2017).

As we enter the middle of 2019 the island’s media is almost completely unrecognisable.

Most people, the vast majority, learn about what’s happening around Phuket on social media now – when we say most we mean over 90%. Facebook is now leading the way in Thailand and Phuket as a key news source. It’s NOW, it’s mostly free, easy to access and just about every Thai, and foreigner, carries it around in their pocket.

Media is measured by ‘reach’ – eyeballs on stories. A more recent term for that is ‘engagement’ – people who click on or comment on a story. The numbers for Phuket’s media speak for themselves, they’re public and are easily checked on the internet (go to your ‘Insights’ page on Facebook and add any pages you want to compare). News websites are taking a second place now to social media on the island as a source of news. These figures are from the past seven days for Facebook engagement… 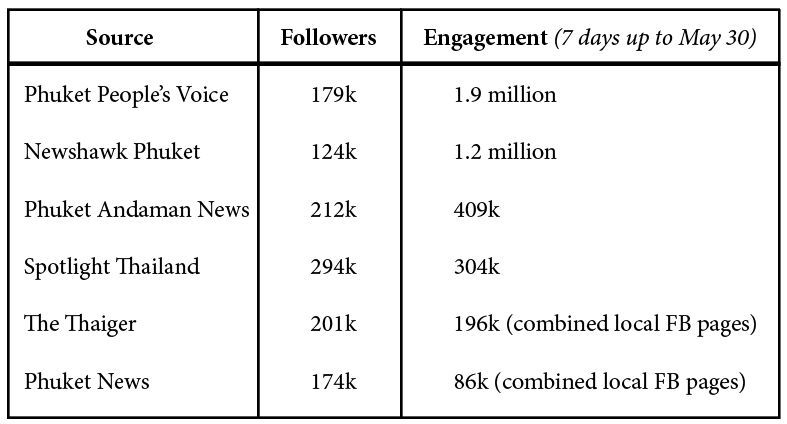 The reach-leaders, Newshawk Phuket and Phuket People’s Voice, are also starting to add English versions of their Thai news posts which will further eat into the traffic of older island news businesses. But their leadership in readers is no surprise when most of the island’s readers are Thai.

For website news there is also a good range of news sites – the two Phuket-based leaders are a long way in front of the others for monthly traffic.

In April thethaiger.com reached 1.56 million users versus 463,000 for the island’s second most popular news website

(similarweb.com stats are usually out by 10-20% but reflect trends and general traffic reliably. If you want to check any website’s traffic just type in the web address. It only measures sites with more than 12,000 visits a month)

Of course there are still other news sources, principally the venerable The Phuket News which keeps pumping out 32 pages of recent news, stories and local ads every Friday – a remarkable achievement by any standard where weekly ‘newspapers’ are becoming a rare luxury in the modern media landscape.

Other social media portals like Instagram and Line also have their share of ‘news’ but it’s tiny in comparison to Facebook in Thailand where the platforms are more about messaging and sharing photos. There is also a handful of radio and video news media on the island but their reach is extremely limited and the numbers not applicable in the wider picture.

When it comes to ‘reach’ and ‘targeting’ there is nothing that comes even close to online media, and the gap widens every month. Well, every week! That an advertiser can target their audience by age, location, interest, search-history and buying habits is astonishingly powerful. And it costs a fraction of what advertisers used to spend on ‘traditional’ media.

More importantly, Phuket’s online media is completely measurable. For advertisers this means that they can measure the true performance and value of their ads.

Bottomline, Phuket’s media landscape has matured remarkably in the past decade and more so in just the last 6 months. And it will continue to evolve. For Phuket readers, in Thai and English, the latest competition means new choices and news voices.

Next week we’ll check out the leaders in the wider Thai media landscape where there’s also been a lot of recent changes.