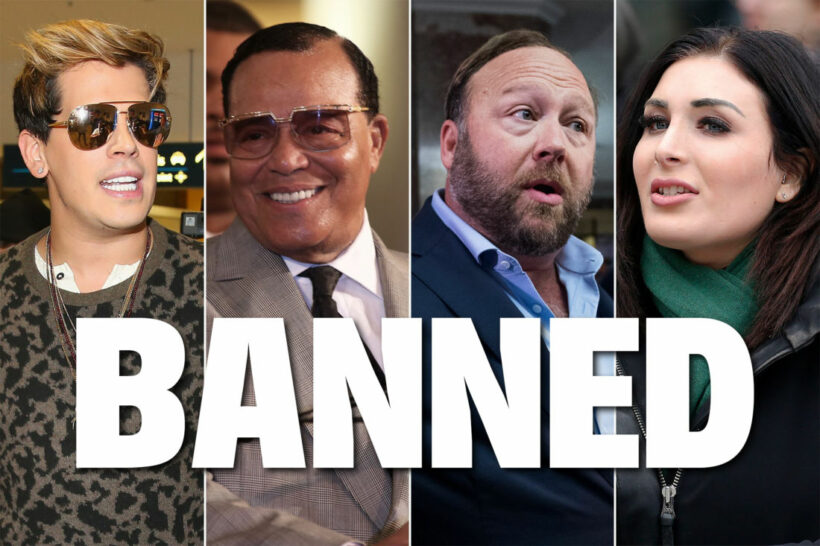 Facebook is banning prominent US conspiracy theorists like the Infowars founder Alex Jones and the outspoken activist Louis Farrakhan in its crackdown on hate speech and fake content. Others blocked from Facebook and Instagram (owned by Facebook) were Milo Yiannopoulos, a high-profile right-wing provocateur; Paul Nehlen, a political candidate espousing white supremacist views; and conspiracy theorists Paul Joseph Watson and Laura Loomer.

In a statement Facebook said… “We’ve always banned individuals or organisations that promote or engage in violence and hate, regardless of ideology.”

Among the most prominent figures who has been barred from posting, Farrakhan, the head of the Nation of Islam, is notorious for spreading anti-Semitic and black supremacist views. Alex Jones, the far-right conspiracy theorist, best known for calling the September 11 attacks an inside job and for describing the Sandy Hook school massacre as a hoax, was also banned by Facebook.

Facebook said those being banned had violated policies against dangerous individuals and organisations.

“Individuals and organisations who spread hate, or attack or call for the exclusion of others on the basis of who they are, have no place on Facebook.”

Other groups kicked off both Facebook or Instagram included Knights Templar International, Britain First, the British National Party (BNP) and the National Front.

Amid pressure from governments around the world, Facebook has ramped up machine learning and artificial intelligence tools in an effort to find and remove hateful content while remaining open to free expression.