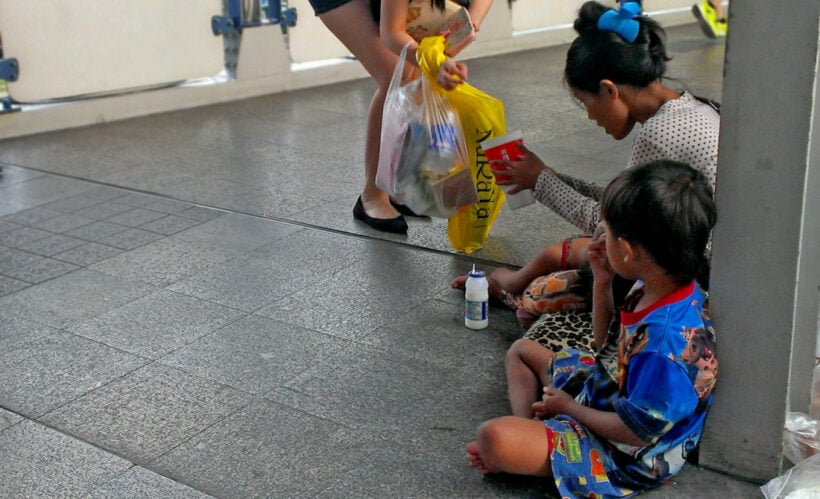 Thailand is aiming to purge itself of beggars in the latest laws to outlaw the practice.

General Anantaporn Kanjanarat, head of the Ministry of Social Development and Human Security (MSDHS), says his agency would co-ordinate with the National Office of Buddhism to ask for co-operation from temples to educate the public about appropriate merit-making and to stop them from giving cash to beggars as it is illegal.

Temples nationwide are being urged to discourage visitors from giving money to beggars, according to the latest edition of the Beggar Control Act that comes into effect in August this year. The minister said stickers warning against handing cash to beggars in English, Chinese, Japanese, Korean, Cambodian and Myanmar would soon be placed at tourists attractions, airports and state offices.

“If people wish to help the beggars, they can make donations to the MSDHS projects for vocational promotion for beggars,” he said.

As temples are the sites for worshipping and merit-making, many beggars wander around temples and other high-traffic attractions to ask for money from visitors.

237 beggars (including 156 Thais and 81 foreign migrants) had been ‘spoken to’ in the past 6 months and a total of 4,361 street performers had registered with the authority for access to public space, with only 300 locations available.

The meeting also resolved to impose a sliding scale of fines on beggars. Those arrested for panhandling for the first time would be fined at 500 baht, the second time 2,000 baht, the third time 5,000 baht and the fourth time and above 10,000 baht.

The new law required beggars to admit to life quality development and protection centres or quit panhandling. Once they are admitted to such centres, they would not be allowed to leave the centres without permission or face a maximum one-month jail term and/or a maximum fine of 10,000 baht.