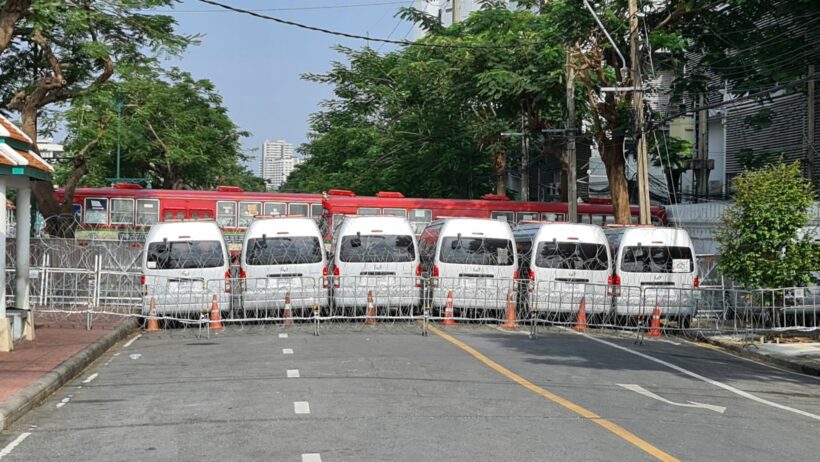 They’ve already barricaded access with used busses, razor wire and steel barriers at the Makkawan Rangsan Bridge, on Rajdamnoen Nai Road. The Royal Plaza was ‘locked down’ at dawn this morning.

Deputy PM Prawit Wongsuwon has warned protesters to remain peaceful and not break the law, whilst police made it clear to the protesters not to venture within a 150 metre radius of the Dusit Palace.

Traffic police say that motorists should avoid these areas this afternoon…

Anyone with plans to visit the Rattanakosin Island area this afternoon and evening should also be aware of the protest. Based on past events, this afternoon’s rally could attract up to 20,000 people.

The Free Youth Facebook page, which has over 1.4 million followers, has advised supporters to bring some basic protective gear. They’ve also asked them to bring paper and pens to write messages and to prepare posters and placards to share the protest demands. They were also invited to bring along prepared letters that could be passed on to Thailand’s King.

The page is also peppered with ‘free to download’ posters and placard artwork, information about how to proceed, pleas for no violence and this… “Let’s meet! 16.00 at the Democracy Monument before the parade to our King!”

The protest organisers have already shown their ability to outwit the police by changing protest locations at short notice and using an intricate web of encrypted message systems.

Police have already been deployed to the Democracy Monument, just as hawkers began occupying the pavements, along Rajdamnoen Avenue to Tanown Road, to sell ready-made food, bottled water, soft drinks and T-shirts.

Police say around 9,000 police have been deployed to ensure peace and order around the protest site and to prevent confrontation between the protesters and royalists, who also plan to gather near the Democracy Monument today.